This was our first real week of preschool.  We had some good moments and some . .. learning moments :-)

Monday was our very first day of class. Josh wanted to teach too so we worked together :-) 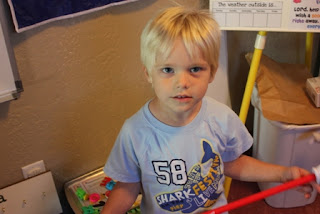 Josh on the very first day of preschool - he is very excited!!!  We started out with our calendar time and he learned the beginning of our verse.  Nate also participated with us and had lots of fun. 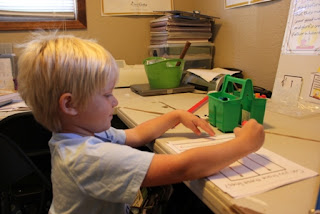 Then we got busy working on school work.  Our big job today was practicing the steps for making the letter "L".  Honestly, I got about a total of 15 minutes out of him before he was done with school and ready to just color ;-) 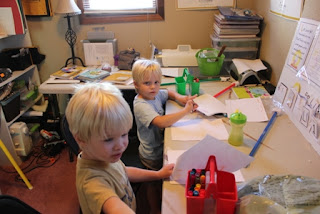 Nate joined us and had fun drawing lots and lots of whales (I have no idea why whales but that is what he chose to draw!) 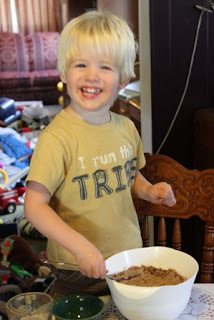 As I mentioned in a previous post, we are working on some practical things in the afternoon.  On this very first day, we baked brownies.  I used two 8x8 pan packages so that each of the boys could make their own. 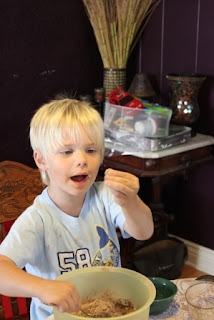 Josh quickly discovered that there were peanut butter chips in the mix and started picking them all out. 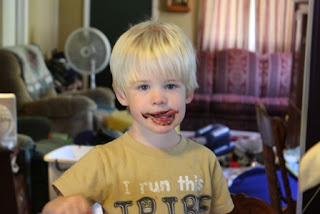 Very quickly, they discovered the joys of licking the spoon so once the brownies were in the oven, they each got to lick their spoon and  bowl. 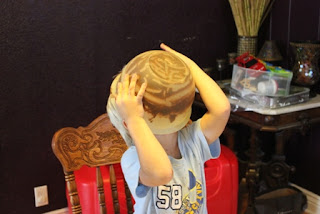 At this point, Josh told me that he needed a different bowl because his tongue wasn't long enough HA!  Once the brownie making was done, both boys had to take a bath because they were covered with brownie mix!

Tuesday we went to a MOPS meet and greet.  I was trying to decide what to say about it and first, I'd like to say we had a great day.  We met my friend, Julie, there with her two daughters and kids got to play on the playground area for almost 2 hours.  Than we went to Julie's house for lunch and the boys all played with her girls for several hours.  Now, the MOPS thing was mostly so that Julie and I had a reason to get together a couple times a month but we aren't going to attend.  The group had some hard and fast rules that impacted us and made it not possible for us to attend right now.  That's fine - Julie and I can just get together periodically without going to group :-)

Wednesday - I did not take any photos while doing our lessons but today was day two and it didn't go quite as smoothly as day one ;-)  Josh really wasn't interested and had his own ideas.  He did read "8 Silly Monkeys" to me  . . . while I was attempting to read our Bible Story.  Then was upset because the other boys weren't in the room.  He did enjoy making "L's" and learning the site word "see".  He had me draw lots of practice "L's" on blank paper for him to trace :-) Our afternoon activity was something the boys both love - they got hair cuts!!! 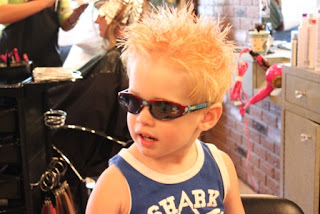 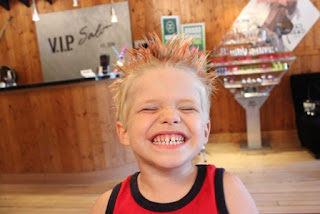 Thursday we got back in the classroom and, like several other new preschool moms who are homeschooling, we also had a little . . .ummm . . .unwillingness HA  It really wasn't that bad but sometimes, trying to get a 3 year old to do what you want them to do is like trying to herd a bunch of cats.  It doesn't work.  One of the battles we are fighting right now is the simple fact that anytime I get out one of our books to read for class, like our Bible book, Josh wants to get his own book from the shelf and read.  We came to a compromise today though - He got to read his book to me and then he listened to me read mine to him ;-)  We also broke out the laptop today to do our power point lesson - I really thought he would be more interested in it but he just wanted to draw the Letter "L" . . . 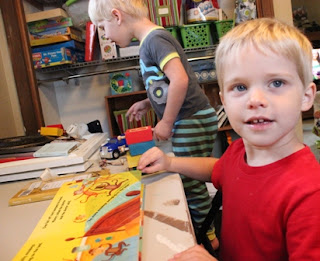 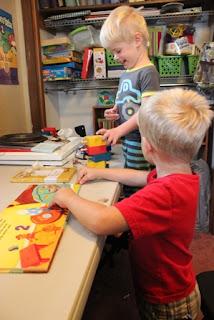 Josh is reading his current favorite book while Nate builds a castle.  Yes, Nate is still in PJ's . . don't judge ;-) 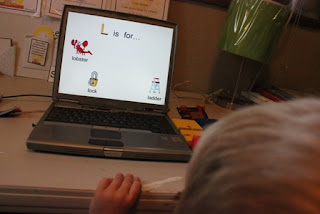 This great power point is part of the Rising Rockstars Preschool lessons that I purchased from 1+1+1=1 for a very small membership fee.  The lessons are really great and the Power Point is a great tool to use.  I think that the more we use it the more Josh will enjoy it. 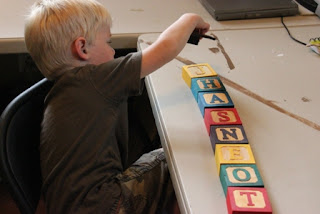 Nate likes to find things to do while we are in the classroom.  These blocks go to wall hangings that go in their rooms (which should be hung up by the time this post "airs"!) he loves hooking them all together and making chains or building castles.  I think he needs some blocks for Christmas :-)

Finally, Friday.  On Friday's we attend "Friday School" with a local homeschool group and this was our first day. 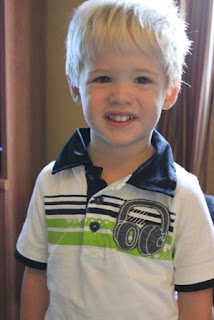 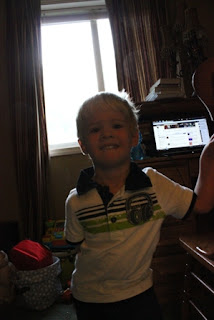 Nate.  dancing the morning away and just having fun! 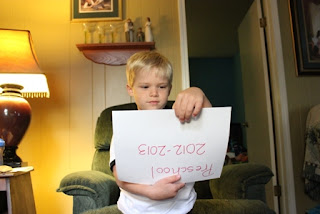 I don't know what I was thinking when I decided to write on both sides of a paper that I was handing to my child who notices everything HA  So, the photo shows him reading my "mistake" on the backside of the page . . which was obviously upside down.  So much for the sign ! 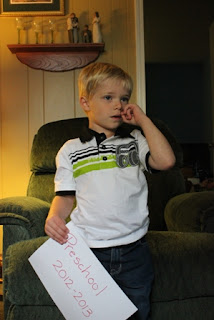 He told me he was too tired to smile so this is the pose I got :-) 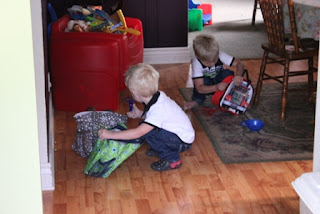 I had to share this photo.  We were supposed to be heading out the door but the boys had to get their purses bags before we left.  Just to keep it real, between the three of us, we left the house with six purses bags.  Seriously. 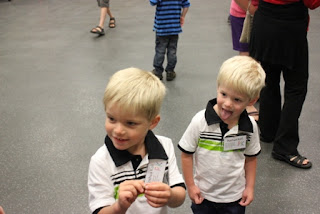 Finally, we arrive at Friday school - this is the only picture I got because I never stopped running (from screaming babies HA) the whole time.  I will say first and foremost that the kids had an absolute great time.  They even told me about their favorite things when we got home.  I, on the other hand, did not enjoy my morning so much :-)  See, I'm one of the helpers in the nursery for the first hour and I'll be 100% honest.  Working in the nursery is probably one of those things that I could live without ever doing in my life.  I don't volunteer for it at church, I never sign up for it at any event . . .I just don't enjoy it.  But there I sat, in a nursery with screaming one year olds.  By screaming I mean s.c.r.e.a.m.i.n.g.  From there, I went into the preschool class so I actually was with the boys for an hour . . .and once again there were screaming kids - this time 2 and 3 years old so they were louder and stronger when they fought to get away (which, by the way, neither my boys or our little friend that comes with us were screaming - they were great and did what they were told!) The room was h.o.t. and some how the teacher of the class figured out I knew what I was doing and made me her helper HA  Then came my free hour - where we can mingle with parents and have a snack except . . I think I was the only parent that had that hour free except for the members of the board who had there own meeting during that time.  Don't worry, I brought my Kindle ;-)  Now, please don't think I'm complaining (ok maybe about the nursery) I'm just keeping it all real on this here blog.  I know it was the very first week, with lots of new families, in a new location - of course it will be chaotic.  Here's hoping next week runs better and the week after and the week after . .. oh, and now I'm prepared for nursery and will bring earplugs next week ;-)

That's the end of week one in preschool.  I did not get nearly as far as I had planned but I also knew that would happened and we will continue this week with finishing up the sections we didn't get to in week one before moving on to new lessons.  We are not in any rush to get through lessons - I want Josh to know the things I'm teaching him before we move on to the next thing.