Too Cute Not To Toot!

I want to start out with an idea that I actually asked a blogger about because she posted about it.  This is one of my favorite blogs to read called, Superchikk, and she shared an idea about creating a photo book for your child.  She gives one to her kids as a stocking stuffer each year that contain 100 photos from the year.  What a great little treasure for kids to hold on to and use as a reminder of people and things. 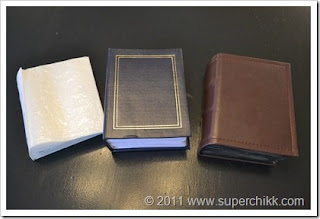 Oops!!  I started this last week and then forgot that I hadn't finished it so, I'm going to post this idea for today and try to remember to create this post the right way for next week!
Posted by Jackie Koll at 8:20 PM No comments:

Email ThisBlogThis!Share to TwitterShare to FacebookShare to Pinterest
Labels: Too Cute not to "Toot"

To begin with, I have one final item that I completed this month and that, of course, is a recipe.  Yes, recipes seemed to be the easy thing to do this month!  Even though I pinned this on Pinterest, it actually comes from a blog that I follow, Jenna's Journey, which gave me a little comfort since I've tried some of her recipes before and they turned out well.  This recipe was for a Pumpkin Chocolate Chip Bundt Cake. I was sold on this for two reasons.  1) We love pumpkin and 2) We love Chocolate Chips.  Put the two together and they are perfect.

So, first, to give you a good laugh before I even tell you anything else about this recipe, this is what mine looked liked. 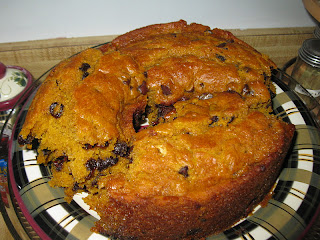 Notice that it is in three big chunks and it isn't a nice round cake?  LOL  Before I go any further I will say that this cake tastes fantastic, I just made a "baker's" error.  Do you want to know what I did?  Very simply, I tried to flip it out of the pan before it was ready and it just fell apart.  That's all.  So when you make this recipe, WAIT the full 15 minutes the recipe suggest BEFORE turning it out of the pan.  By the way, the rest of the cake I just dumped into a bowl and we ate it with dinner just using forks.  It was too good to throw away.   I don't actually own an bundt pan so I used an Angel Food Cake Pan and had to cook it for about 1 hour and 10 minutes.

2 sticks unsalted butter, at room temperature
2 1/4 cups flour
2 teaspoons baking powder
1 teaspoon baking soda
2 teaspoons cinnamon
1 teaspoon ground allspice
¼ teaspoon fresh nutmeg
1 teaspoon salt
1 - 15oz can of pumpkin puree
3/4 cup well-shaken buttermilk
2 teaspoons vanilla
1 1/4 cups granulated sugar
3 large eggs
2 cups of chocolate chips
Preheat oven to 350°F. Spray a 10 inch bundt pan, then dust with flour, knocking out excess.
Whisk together flour, baking powder, baking soda, cinnamon, allspice, fresh nutmeg, and salt in a bowl.
Separately, whisk together pumpkin, buttermilk, and vanilla in a bowl.
Cream butter and sugar in a mixer. Mix in eggs, one at a time. On low, add flour and pumpkin mixtures in batches. Mix just until combined, do not over mix. By hand, fold in the chocolate chunks.
Spoon cake batter into pan, smoothing top. Pound the pan on the counter to settle the batter. Bake until a toothpick comes out clean in the center of cake, about 1 hour. Cool the cake in the pan, on a rack, for 15 minutes. Invert rack over cake and re invert cake onto rack. Cool completely before serving. Dust with powdered sugar, if desired.
So, now to move on to my other ideas that I did not complete this month.
First up is an idea from Peppermint Creative and it was actually an idea I found prior to Pinterest but then ended up also pinning it.  It is the 52 Things Deck of Cards Album. 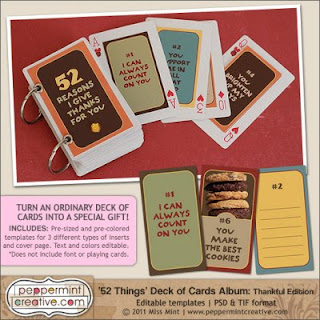 Now, this is a great idea, don't get me wrong.  But, after I had gathered my scrapbook paper from my collection, found a deck of cards, and starting thinking about this project I realized that for all of the work it would take, it would end up sitting on a table or shelf after my husband looked at it.  It would be two big to put in an album later so it would gather dust.  Why would I want to spend my time on something that will get dusty? :-)  So, in the end, I decided that I did not want to create this idea.  I think I can create a card for my husband for Valentine's Day that will express just as much but be something that I could actually keep in our scrapbook.
Another idea that I still really like comes from Christina Williams and is for Canvas Silhouettes.  I think that this are classic and would actually really love to make them but I knew that it just wasn't going to happen this month or anytime soon. 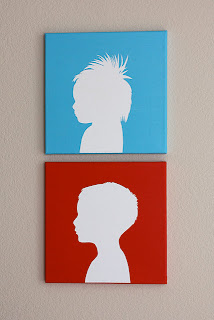 I actually had a 2 pack of 16x20 Canvas' in my cart at Hobby Lobby a few weeks ago but those just seemed so big; the difference in price to buy two 8x8 frames was pretty big. (The 2 pack was on special for $7.50 . .. verses $15.00 for a single 8x8) Plus, I would need to get some contact paper and blow up photos . . .it was becoming a very extensive project that I just didn't have the time or the money to do right now.  I think I need to print a couple 40% coupons one of these days and have my husband and I each pick up a canvas in the size I want - then go from there.  So, you may see this idea show up on my goals before the end of the year!
Finally, this idea comes from Diary of a Quilter but I've seen it so many other places as well and it is just for the simple homemade magnets. 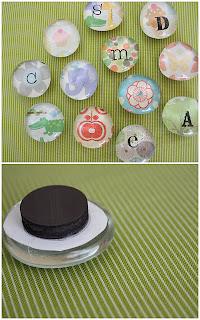 I'm halfway into this project - I've purchased the glass beads/marbles but need to get magnets still.  Then I can cut the scrapbook paper and I have plenty of letters to use as well.  These are great to use for learning letters or for doing all of the magnet worksheets.  I also want to pick up some inexpensive cookie sheets to use with these as well.  I do plan on finishing up this project in February.
I did complete 4 items on my goal list (plus a few that weren't) but sadly, those 4 items were all recipes!!  Better luck next month :-)
Posted by Jackie Koll at 10:00 AM No comments: