I bet you wonder where I'm going with a blog title like that, don't you?  Well, I really just want to share a couple of new products we've tried recently and actually really like.  (And no, I have no affiliation with any company - this is just my own personal opinion!)

First up is the Magic Mesh Instant Screen Door from Bed Bath and Beyond. 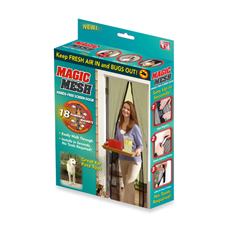 I had seen this in a recent flyer from BBB and thought it might work for us and then, much to my surprise, my mom picked one up and gave it to us.  Our main entrance is our Sliding Glass door in the kitchen.  Nope, not ideal but replacing it with a nice set of french doors is pretty far down on the list right now.  Our regular screen takes a beating throughout the year and now that the kids run in and out, that screen tends to get left open all day long.  Sure the dog loves it, but so does the outdoor cat (who, by the way, got in before we left on vacation and we didn't know it  . . until we got back!  It wasn't a big deal but boy was she glad to get back outside HA!).  When my husband looked at this, he was pretty skeptical that it would work and I was a little concerned that it would be a pain.  We figured we would try it and if it didn't work to keep it up, we could take it down and I could put it up on warm days when the slider was going to be open all day.

Boy we were wrong.  The screen is perfect.  Now, as with all things, we learned things after we put it up that would have made it a little neater but it still works fine.  The magnets REALLY pull it back together.  Even on a windy day, when the wind caught it a little while it was open, you could actually see the magnetics trying so hard to pull together HA  The kids quickly figured out that they can walk right through it and yes, you can really go through it with full hands.  The dog has NOT figured it out yet but has accidentally gone through it a few times.  The only time it is a pain is when the slider is closed and you have to go through both the slider and the screen to get out - but it is really similar to have a door and a screen door to go through I guess.

When my husband put the sticky tabs on it to hang it, he did not realize they were actually Velcro so the Velcro didn't go on the same direction which is why we have a slight problem at the top - the pieces don't stick.  I really just need to pick up some more Velcro and we can fix that easily.  Also, we had to hang it, obviously, on the outside because there was no where to attach the second side if we hung it inside the door.  Even hanging  it outside, we had to attach one side to the glass door that doesn't open/close since the screen is bigger than our door opening but I don't think anyone would notice just walking in and out the door.  We both think it looks nice too and because it is darker/thicker, it also helps shield the sun a little from the kitchen too.


The next item is also from Bed, Bath and Beyond and is called Fresh Wave.  It is an Odor Neutralizing Product. 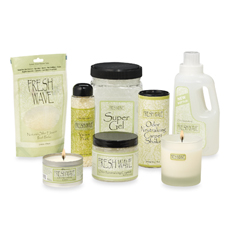 A little history.  When my husband was traveling over the road down to Chicago a few times a week he listened to a Chicago Radio Station every day and they would have a pet specialist come on the air periodically.  This Fresh Wave product is what they recommended to help neutralize any pet smell in your house.  When Darryl told me about it, I tried to find it but couldn't.  Well, last weekend while out and about, I got to spend a little time in BBB (my favorite store right now, by the way!).  I went into the bathroom and thought "Wow, it smells nice in here" and then I noticed a canister of the Fresh Wave Crystals sitting on the counter.  Needless to say I picked some up!  There was a combo pack with a 14 oz jar and then a small "sample" jar for $14.99.  We have a few stinky areas in our home (HA) one is the kitchen/stairwell/basement.  Because the stairs come right up to the basement - all musty, pet related smells (the little box sits near the bottom of the stairs) greet you as you walk in the door.  I placed the 14 oz canister on one of my new shelves in the kitchen and it actually blends in with the wall :-)  It really works - it smells good and keeps odors at bay.  Now for the true test.  I took the small one and put it in Nate's room.  No he doesn't stink but his diaper trash pail gets more use than any other one because all three boys end up getting changed in there at some point during the day (My two and the munchkin I babysit).  I can change the trash daily but throughout the day, wow, some days it's enough to knock you out.  On Thursday evening of last week I finally put it in there (there were some nasty diapers that day - so I doubted it would work).  I opened his door to get him up on Friday and it smelled clean and fresh in his room despite the trash (yes, I left it in there on purpose).  What a difference!!   Even if your home isn't "stinky" this product is just so fresh smelling.  I did not get one for the bathroom but I am going to - it's too good NOT to have one in there!!


There is one last product I picked up at Bed, Bath, and Beyond last weekend and that is a two pack of the Damp Rid tubs. 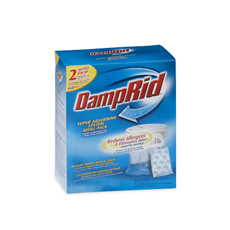 The photo just shows the refills but I purchased the starter "kit" with the buckets - two for $5.99.  My sister-in-law uses these in her house and told me they actually worked so I picked them up for my bathroom and basement.  I've noticed a difference in the moisture level in both areas.  The one in the basement is placed in a little area right off the laundry room and within 24 hours I noticed that the floor in that area didn't look as damp and this morning I noticed it is dry looking.  I placed the 2nd one in the bathroom and have noticed instead of staying damp all day, it dries out pretty quickly after showers.  I plan on picking up the refill pack (4 refills for $6.99) soon so I have them when the others are gone.  Sometimes it is just a little thing that helps out :-)

I did pick up a few other things on my outing like a new paper towel holder that hangs in the kitchen (one less thing on the counter!), a banana holder (wait, a NEW thing on the counter HA!) because we ALWAYS have banana's sitting on the counter in our house, and a bottle to hold olive oil.  I used to have one but the cork eventually fell apart and I just never replaced it - my husband has been asking me too for . .years :-)

Have you tried any new products that are worth sharing?