I've learned through the years the often the best gift ideas come from other blogs - tried and true gift ideas from other parents and the gifts they have given their kids!  So, I thought I would start sharing some gift ideas and, when Christmas returns next year I will try to remember to post these ideas once again!

Christmas Eve - I have always tended to over think these really creative ideas for Christmas Eve gifts and, honestly, they don't go as well as I hoped they would.  For example, one year, the boys got a book called "The Monstore" and each a set of supplies to make puppets. I thought it was awesome . .. the boys, not so much HA! 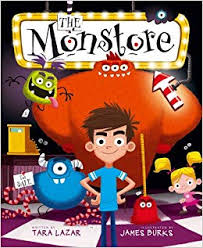 (In all fairness, this did become a favorite bedtime story book!  ) 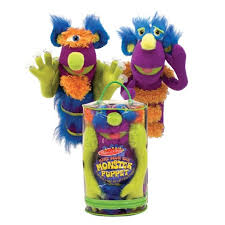 (These puppets are actually super cool - my boys just weren't into them.  I would recommend them to someone with kids that love to be creative with toys like this! )

This year, I decided to keep it a little more simple.  Naturally, I picked up some new PJ's for them.  I found them the week of Thanksgiving at our local Meijer when they had them on sale for "buy 1 get 1 half off" which made them super affordable. (Not to mention, they didn't ring up correctly but, when I explained it to the cashier, she was so fed up with the sales not being in the system correctly, she gave me an additional 25% off of the 15% already given so I got them for a steal!) I then got them each a set of Pokemon cards because they both love Pokemon and then I found these awesome logic games. 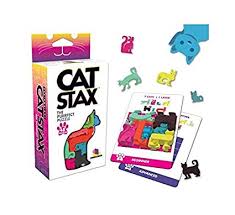 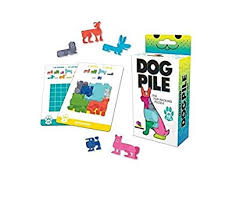 They can both be found on Amazon and in Meijer -- my boys had fun with them both.  Each game comes with cards.  The cards show what colored cat/dogs to use in the puzzle and the area they need to fit.  Using logic, you solve the puzzle.  Don't worry, there are also answer keys!  The Dog Pile game seemed to be a little harder and Nate and I did have to look at the first clue to figure it out but then Nate was able to complete several others without help.  Both of these puzzle games are great for quiet play and are small enough for easy transport anywhere.

These games were a perfect hit.  Both of the boys played with the game they got after opening it and they enjoyed the game!  Yeah!