This past week we worked on our regular school work but, more importantly, we worked on Valentines.  Personally, I love holidays.  Over the past 6 years I've tried to do some little things for holidays but quickly learned that the boys were not old enough nor were they interested in doing most of it :-)  Now, though, they are just barely getting old enough to want to do things and ask lots of questions about holidays.  For example, Josh asked what we do for Valentines Day.  I told him we kiss and eat chocolate - that every time he walks past me I get to smooch him.  He told me that Valentine's is not his favorite holiday HA!

I took the boys to the store and let them pick out their box of Valentines, made them a list of who to make them out to and we worked on them each day.  Now, in homeschool, you really don't have a bunch of classmates to send them to so instead we made them for all of the Aunts and Uncles and cousins plus Papa and Nana and Grandpa and Grandma.  I will say that we shortened a lot of names because their HUGE handwriting would not accomodate such names as Uncle Ken and Aunt Lynnette on that tiny card (So it was Ken  Lynn !!) 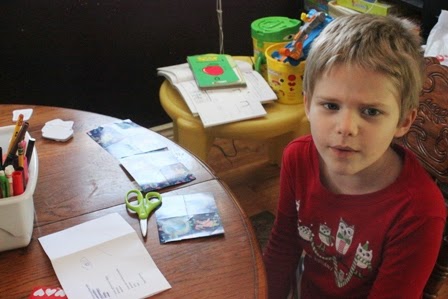 The first day we did Valentine's, it took a lot of explaining of the concept.  But, by the second day, things got easier.  I watched as Josh took out the four Valentine's he needed.  He proceeded to attach the little notepad to all four, then right his name on all four and finally, wrote each individual name on each one.  Yep, he is the one that tends to be a little OCD :-) 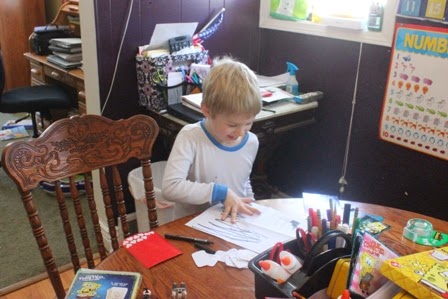 I love to see the boys being creative and one of the most creative things they love to do is to have parties.  On this particular day, they were having a party for Nate's Dad.  :-) (It should be noted that when they play, they have different parents . . I couldn't make this stuff up if I tried) 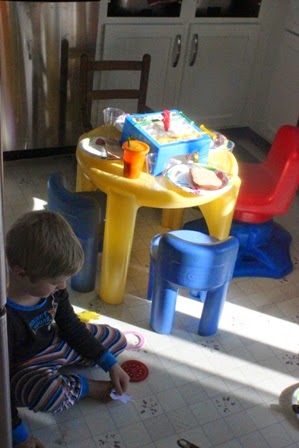 The table with the cake (also known as "Break the Ice" and lots of (pretend) food. 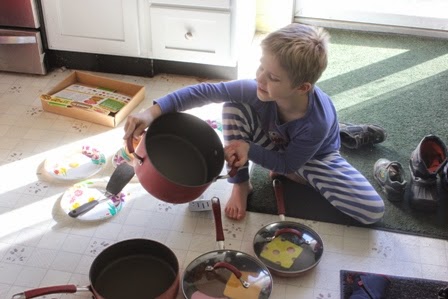 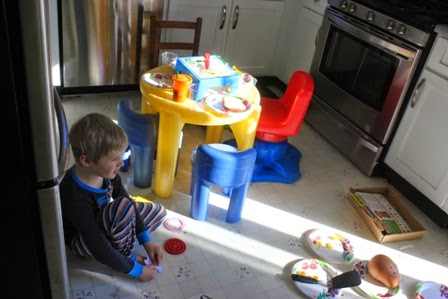 They also got out my pots and pans and lots of cooking tools to make their meal.  It was great listening to their creativity.  I was doubly impressed that they cleaned it all up without being asked :-)

This week, I started counting pages in some of Josh's workbooks and I start to get a little excited because we are getting very close to being done with handwriting and are cruising through his math workbook.  I love it as I really have been working to be done by May so that the boys can enjoy the spring weather!