One of the meals I struggle with most is . . .breakfast.  I'm not a morning person so the thought of cooking breakfast is not something I enjoy unless I can cook it at like . . .noon :-)  With summer coming I thought I would try a few different smoothie options.  Things that are quick, easy and COLD!  Eating Cream of Wheat (which I do love) is not that enticing when you wake up to 80 degree temps at 6:00 am :-/  So, I've tried out three different options:

1) Yoplait Smoothies - These are found in your grocers freezer.  Of the three I tried, these are my least favorite but that isn't to say they aren't good.  The directions call for just adding 1 cup of milk - I usually add at least a cup and half or it doesn't even come out of the blender and I still have to eat it with a spoon.  I've tried the chocolate banana, Strawberry banana and Blueberry Pomegranate.  The reason these fall third is their "texture".  I find them really creamy and not as cold as I would like.  It's like I need to add ice to make them colder.  I want something that I "crave" and I don't crave these at all. 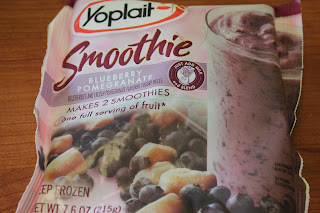 2)  Dole Shakers - These are also found in your grocers freezer.  I love these.  First of all, you don't need a blender - you add the liquid to the canister and shake!  The directions call for adding juice but I also added Coconut Water.  The juice makes it taste the best, in my opinion, but the Coconut water was good, just not as sweet.  These I crave.  Not only do I end up having one in the morning, sometimes I make one in the afternoon for a snack. So far I've just used regular Orange Juice but I think I will try these with "Trop 50" which will make them more "Weight Watchers" friendly . .. granted I don't really care to drink Trop 50 "straight-up" it reminds me of Tang!! 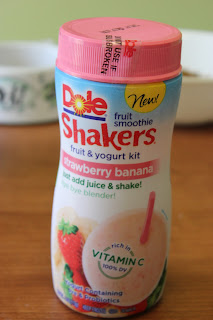 3) A Homemade Recipe  -The recipe that I use is for a Tropical Green Smoothie from Skinny Taste.Com and I really love it.  It's cold and not too creamy, which is good.  I do cut the recipe in half and it still makes a full cup and a half of smoothie which is alot :-)  Click on the link above to find the recipe :-).  This is without a doubt the healthiest of the three options with the greek yogurt and spinach involved.  :-) I've used both fresh and canned pineapple and they both work perfectly.  I also still throw a whole banana into the blender since the half wouldn't keep well :-) 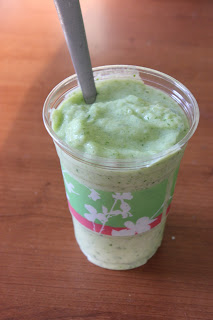 To be truthful, the one I still crave the most is . . .. the Dole Shakers!  I think I will keep those around for a treat in the summer.  The one I would eat for a healthier breakfast would be the Homemade Recipe.  (Can you guess which one I won't buy again??? - I still have one in my freezer that I really don't even want to use . . . )

I think I now need to venture out and try some more homemade smoothies and see if I can find a few others that I like.

*I have no association with any company related to these smoothies - I'm just stating my opinion :-)