Stuffed Cabbage is one of those odd things that I would have thought I did not like but since my husband loves cabbage, I have made it and, yes, I like it.  It's basically the same filling as what goes inside a stuffed pepper but . . well . .with cabbage :-)  Recently I came across this recipe for Stuffed Cabbage Casserole that sounded good; then a week later another blog I follow posted about how great it was so I decided to sneak it into our menu a few weeks ago.

This was a surprisingly great recipe despite my unintentional errors :-)  As I was putting it together I realized I had picked up two cans of diced tomatoes and did not have a can of Tomato Sauce.  Shoot, I didn't even have a can of tomato soup to throw in for a "thickener" or to add the sweetness you get from Sauce.  Instead I added about a teaspoon of sugar to off-set the acid in the tomatoes.  A couple of other things - I used ground pork only because it was more than a buck cheaper a package that week at the store and we loved it.  This recipe does call from a head and 1/2 of cabbage - I think that is too much.  I only used about 3/4 of the pre-cooked cabbage in the recipe.   The next time I make this (and I will again!) I will make it in a 8x8 pan - keeping all the ingredients the same but I'd probably use a little less cabbage (and yes, I would use two cans of diced tomatoes PLUS a can of tomato sauce ) 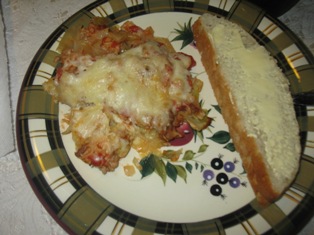 Heat a large frying pan on medium heat; add ground beef and cook until it's browned and cooked through, breaking it apart as it cooks.  Remove ground beef and set aside. In the same pan, add 1 teaspoon olive oil, chopped onion and cook over medium heat until the onion is translucent and starting to brown,a bout 5 minutes.  Add the minced garlic, dried thyme, and paprika and cook about 2 minutes more.  Then add the diced tomatoes with juice, tomato sauce, and ground beef.  Add water to the pan.  Simmer until it's hot and slightly thickened, about 15-20 minutes.

While it simmers, cut cabbage in half, cut out the core, and remove any wilted outer leaves; chop the cabbage coarsely into 1 inch pieces.  Heat remaining olive oil in a large frying pan or dutch oven; add the cabbage and cook over medium-high heat until the cabbage is wilted and about half cooked, turning it over several times so it all wilts and cooks.  Season with salt and fresh-ground black pepper.

When the meat and tomato sauce mixture has cooked and thickened a bit, stir in the 2 cups of cooked rice and gently combine.  Spray casserole dish with non-stick spray and layer half the cabbage, half the meat mixture, remaining cabbage and remaining meat mixture.  Cover tightly with foil and bake 40 minutes or until the mixture is just starting to bubble on the edges.

Remove foil and sprinkle on cheese (if using).  Bake uncovered on additional 20 minutes, or until the cheese is melted and starting to slightly brown.  Serve hot.

On the other blog I mentioned earlier - when she made it she put all of the cabbage on the bottom so that those in her family that did not like cabbage could easily push it aside and just eat the meat portion.

There are a couple of things with this recipe I do want to point out - it is a lot of work with a lot of steps which create a lot of dishes.  It is one of those recipes that you need to plan ahead for and actually have everything ready before you begin :-)  Just  something I learned the first time I made it!
See that bread in the photo - check back next Friday for the GREAT recipe :-)
Posted by Jackie Koll at 10:00 AM No comments: