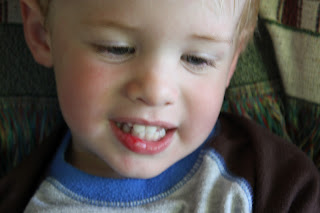 Can you see it?  That nice fat lip?  That's Nate and this is our first "real" injury.  Sure, the boys have had cuts and bruises before and even a few bloody lips but nothing like this.  At first we thought he had a few loose teeth but, other than I nice, big, bloody, split lip, he's fine.

What happened?  On Friday afternoon, he was sitting at the top of our slide.  The munchkin I babysit was at the bottom of the slide.  Nate just doesn't stop so having someone at the bottom doesn't phase him and he just went down.  Well, his face hit the munchkins head and Nate is the one that got the battle scars!  Yes, he cried.  A.l.o.t.  Yes, I had to kiss his lip multiple times (because after all, mom's kisses are supposed to make everything better); in the end though, he's pretty tough :-) 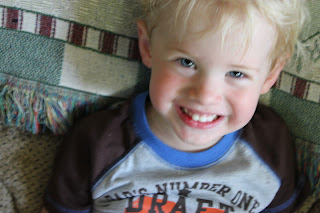