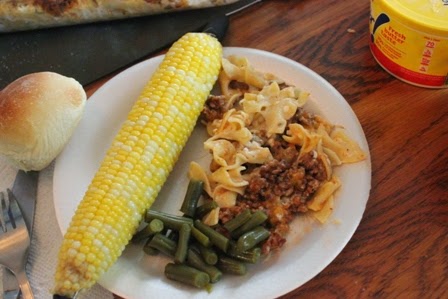 A friend of mine brought two freezer meals of this meal just before Darryl had surgery and I really liked it.  It was something simple, different, inexpensive to make and similar to lasagna. It just so happened that this recipe showed up on Pioneer Woman just a week or so later so then I actually had the recipe!  This would be an easy recipe to cut in half OR once your family has eaten its full, individual servings could be frozen to use for lunch or for a quick dinner later.  I will admit that I totally did not read the last set of instructions so I did not layer mine - instead I dumped in all of the noodles, put the meat mixture on top and layered the cheese.  Personally, it tasted great and was SO much easier than trying to layer!  I also added the traditional lasagna seasonings to the meat mixture to add a little more flavor (I felt the meat was a little bland).

Preheat oven to 350 degrees.
Brown ground chuck in a large skillet. Drain fat, then add tomato sauce. 1/2 teaspoon salt and plenty of freshly ground black pepper. Stir, then simmer while you prepare the other ingredients.
Cook egg noodles until al dente. Drain and set aside.
In a medium bowl, combine sour cream and cottage cheese. Add plenty of freshly ground black pepper. Add to noodles and stir. Add green onions and stir.
To assemble, add half of the noodles to a baking dish. Top with half the meat mixture, then sprinkle on half the grated cheddar. Repeat with noodles, meat, then a final layer of cheese. Bake for 20 minutes, or until all cheese is melted.
Serve with crusty French bread.