Here is our week in pictures! 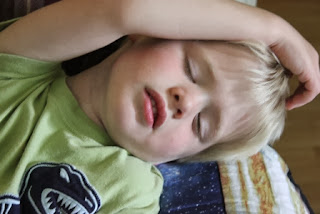 Isn't that face adorable?  This is actually from a week ago Sunday.  The boys and I went to church then met my husband for lunch when he finished working.  He had a concert that evening so we were just all hanging out.  After lunch we went to the mall playland and the boys played until I noticed they kept laying down on the ground they were so tired HA!  When we got home, I carried Nate inside, he woke up so I put him down to take off his shoes; he wandered to the couch where Josh sang him to sleep with a "littleby" and Nate slept for 2 hours, took a bath and went to bed and slept all night!

Now, on to school! 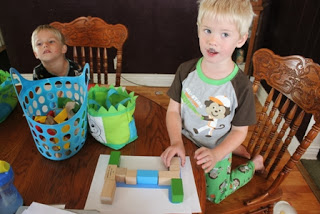 I love this picture HA!  Nate has a mustache from sucking on a marker cap :-)  One of the great things in the Letter of the Week curriculum is the use of things around the house to practice.  Today we used blocks to make the letter "I".  Some weeks we use stickers or legos or whatever else I can find around the house. 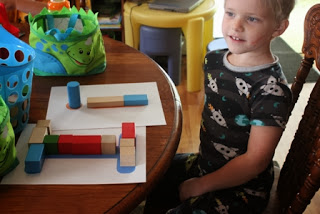 Josh really struggles still with wanting to do the preschool lessons so he did the letter "I" in blocks too.  It is still great review for him so how can I say no? 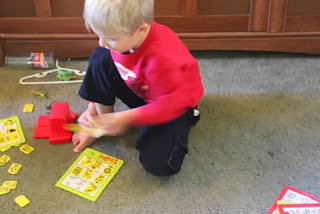 Later in the day the boys got out some games to play.  We are still learning how to play games; and that one person doesn't always have to win!!

Tuesday:
No School :-)  I took the day and went to a scrapbooking crop so I did not make Nana do school BUT my boys said that next time, they want Nana to do school with them so I'll have to leave some fun lessons for her to do!
Wednesday: 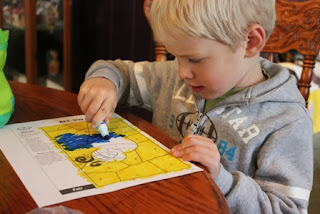 In just the first few weeks  of school, Nate's coloring has improved by leaps and bounds.  He know stays in the lines (unless he is adding legs to his elephant picture hanging on his wall; I am very thankful for washable markers HA).  This was our Bible Activity for the day - "Be Fair".  We talked about how Bees don't take all of the nectar but leave some for the other bees; comparing that to sharing with others. 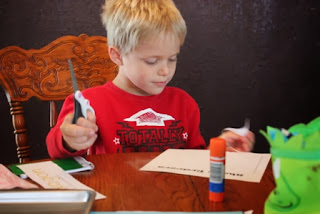 Scissors and glue sticks - it is what makes a boy happy! I love those feet (and they are "almost" clean!) 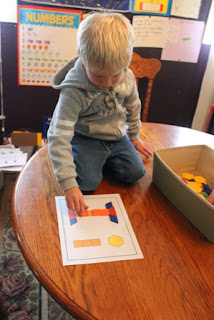 Again, making the letter "I" with tangrams.  I need to get more of these though - the boys tend to fight disagree over the pieces. 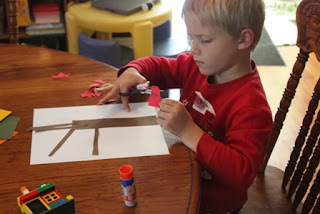 This week, we only did an afternoon craft on Wednesday.  Monday the boys were outside playing so I just let them play and on Thursday, well, I don't even remember HA! 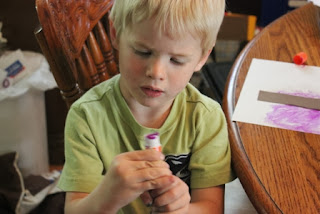 I found this great idea over at Toddler Approved for a "Snippin' Tree".  Basically, I gave the boys 4 different colors and let them snip the "leaves" and glue them.  I thought this would be a huge hit. Well, these were their finished products.  Notice?  One color per tree?  They got bored REALLY fast with this idea!  Oh well, they can't all be winner ideas, can they?

Thursday:
I don't even remember Thursday .  For real.  I don't think we did school . .. I think we ran errands that morning which I won't do again with 4 kids under 5!!

Friday:
Normally we go to Friday school on Friday.  Well we did, for like 30 minutes, and then I had a kid puke.  At least he made it to the bathroom! 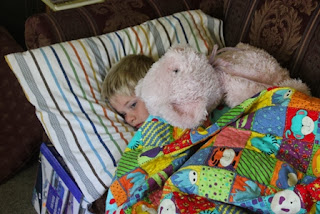 This poor little guy had the flu - running a fever and crashed on the couch; something we never see.  He kept asking when his fever would leave :-( 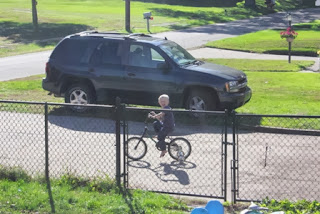 On the other hand, this little guy was LOVING that his big brother was sick because he got to ride the two-wheel bike the whole day.  He cannot WAIT to get his own bike.  It will be kind of anti-climatic since he can already ride one so I had to take a few photos of his "first" bike ride! 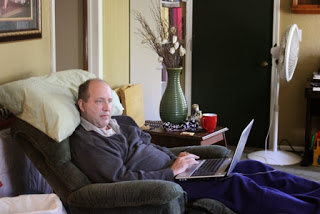 And then there is this guy - the big kid has a blown disc and is pretty much "chair-ridden" at this point.

So, that was our week.  I'm a little more prepared for this coming week - only 3 days of school this week due to a doctor's appointment on Thursday with the big "D" for his back.

It's hard to believe that it is the night before October.  I want to incorporate some more fall activities and pumpkin/fun Halloween stuff plus we have a birthday this month for a special boy who is turning 5.