A few weeks ago, Josh saw a cookbook in the checkout lane at the grocery store and wanted to buy it. It was all about cakes, cupcakes and other fun cake things (Like cake pops).

He read it from cover to cover, then "read" it to Nate.  They proceeded to read it every night after they were supposed to be in bed (hahaha) and Josh carried it everywhere.  He even took it to Pizza Hut when we went and showed the waitress!  Then . . .he left it outside on accident and it rained.  Hard.  I had to go buy a new one it rained so hard.  (yes, it was ruined HA!)  The boys each picked out a cake they wanted to make and this is what we made: 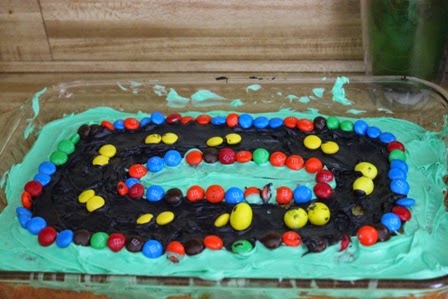 Nate picked a race car cake.  My fingers were black from the food coloring to make the racetrack and we ran out of regular M and M's so we had to use some peanut M and M's but all in all it turned out well. 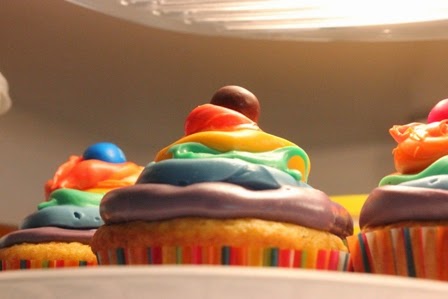 Josh picked out these rainbow frosted cupcakes.  Yes, that is a full rainbow of frosting - each layer a different color.  It was quite the task to get that frosting on there especially since what I used wasn't nearly as thick as the book showed!  The funny thing?  Josh never ate one of these because he said he doesn't really like frosting.  He ate the M and M off the top of one and took a bite out of one cupcake but that was it!

We had fun though.  It was a family activity and I will admit that the reason it got done is because Darryl offered great ideas along the way otherwise I would have given up !  I will also admit that I am glad the boys forgot about the cook book for now . . .making those two desserts made me realize that I don't really want to decorate cakes :-)
Posted by Jackie Koll at 7:00 AM No comments: