I've mentioned a few times in past posts about our local Free Fair.  It is the largest Free Fair - but I recently asked Darryl how it was free.  We had to pay to park and pay for every single thing in the Fair.  He pointed out that it is the fact that there is no fee to get into the Fair - I guess I never realized that you normally paid to get into a fair!

We went to the fair two years ago with the boys but they were both still so young they were very limited on what they could do.  Last year, Darryl was in the midst of recovering from his back surgery so we didn't go.  The boys started asked several months ago about going so we knew we had to take them!  It was awesome.  They are at the perfect age and were able to ride just about every ride they wanted to because they are just barely tall enough.  I was pretty impressed with all they did! 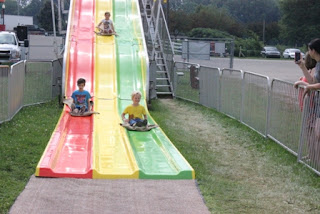 This was their very first ride (Josh is on the yellow slide and Nate is on the Green).  We arrived at the fair at about 11:00 on Saturday morning hoping to beat the heat.  Thankfully it was cloudy and breezy which helped alot!  We bought the boys each a ride bracelet which gave them unlimited access to all of the rides.  We probably made our money back 4 times over with the amount of rides they rode! 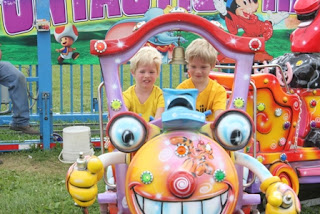 Because we came in at the front, they started on these little "kiddy" rides.  They are the rides that they were able to ride two years ago. 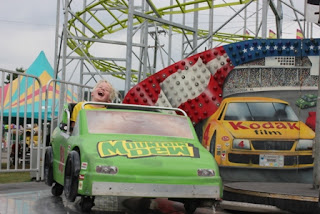 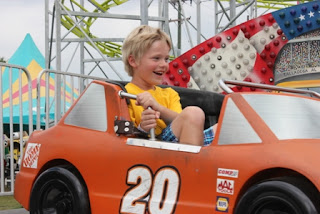 This car ride was hilarious.  It had really hard turns and the first time the cars came around the turn, the boys screamed and then, couldn't stop laughing the whole ride. 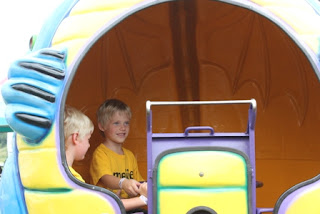 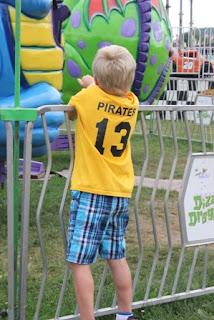 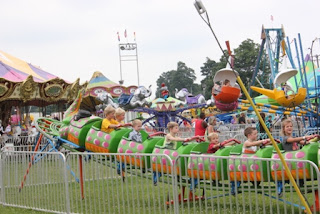 There were two roller coasters - this "little" one (the boys are in the yellow shirts) which they were not impressed with at all.  Why?  Because there was a big one that they were not big enough to ride without an adult.  Darryl and I did not have tickets to ride so they have to wait until next year to ride the big one! 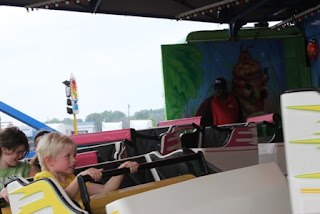 Nate went on this ride by himself the first time.  I can't remember where Josh was at this moment but . . . 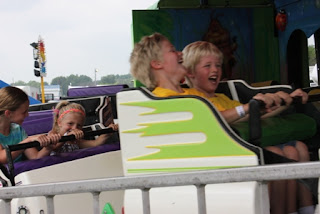 It didn't take him long to make his way over to ride again with Nate! 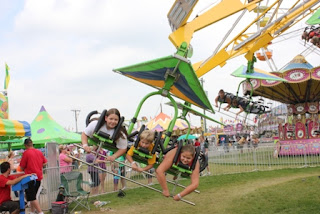 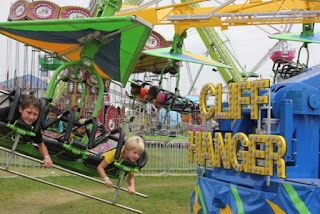 The "Cliff Hanger" was a favorite ride.  This is a ride that Nate was barely able to ride - good thing his hair was standing on end ;-).  It was actually one of the more peaceful rides since all they did was glide through the air! 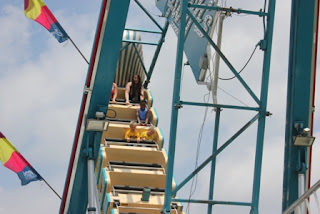 This huge pirate ship was a favorite.  They rode it five or six times ending by sitting in the very back row where it went the highest.  Nate claimed this as his favorite ride.  It was about this time that the sun came out and we were all ready for a break not to mention that the sun came out and it got HOT!  We headed back to the truck and went to McDonald's for a snack before heading home to relax in the cool house. 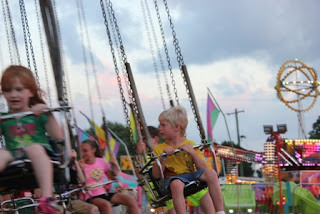 After dinner, around 7:00, we headed back to the fair.  We really wanted the boys to enjoy the fair at night because of all of the lights.  They didn't disappoint, it wasn't long after we were there that the boys noticed, and talked about all of the lights!  This time, when we got to the fair, the boys wanted to ride different rides so Josh with with Darryl and I took Nate.  Nate had been waiting to ride the swing - he was so serious the whole time watching everything about the ride - I think trying to figure out how it worked. 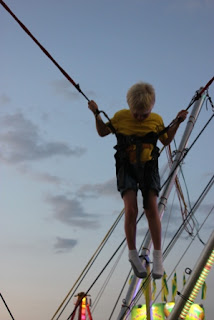 This was one of the "extras".  We gave each of the boys $5.00 to try out the bungee.  I didn't get a photo of Josh but he had more success than Nate - Nate's little legs got tired and he ended up stopping before his time was up yet he talked about how much he loved this activity. 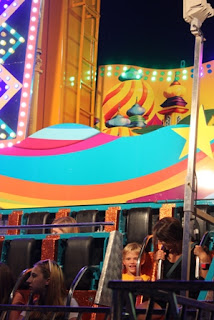 This was the final ride of the night - it was a HUGE ride that went up super high and yes, that is Josh sitting in the seat.  I was amazed he went on it by himself.  He was sitting next to the nicest lady who he talked to a lot HA! 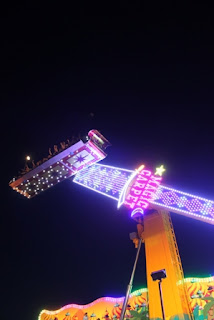 Look how high this ride goes!  Whew!  Josh loved it though and Nate said he won't be scared to ride next year :-)

The fair was a total success.  We are already looking forward to next year :-)
Posted by Jackie Koll at 7:00 AM No comments: