Make it Monday - The uses of Kool-Aid Lemonade

The "curse" of being blond . . .blond hair likes to suck up all the impurities in water.  Whether it be rust or chlorine, blond hair will turn funky colors!  Despite having a great water softener, my hair still starts to show the fact that we have really rusty water every few months.  Periodically, when it gets really bad, I'll pay the money to have my stylist do some treatment on it - sitting under the dryer for upwards of 45 minutes to make sure it "really works."  And it does, without a doubt, but it also costs money. Recently, a friend mentioned in passing that she did a rust treatment on her hair so I asked what she used.  She told me she uses this: 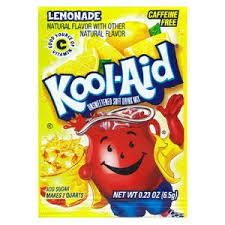 Yep, that's it.  Lemonade Kool-Aid.  For real.  Now, back in the days before you could spend $5.99 on dishwasher cleaner, I would use this same product (shown above) to clean my dishwasher and it worked like a dream for $0.22.

So, I took about 4 packets of this stuff (so just under $1.00 for this treatment), added a teeny tiny amount of water to make a paste.  Then, took a long how shower.  After getting my hair wet, I rubbed this all over it, put on a shower cap, and stood in that hot, steamy shower for 15 minutes to let the heat and "paste" go to work on my hair.  I'll be honest, I figured it wouldn't work.  My friend told me to leave it on for at least 20 minutes but I'll be honest, by the time it hit 15 minutes, my head was burning HA!  So I rinsed it out.  I could tell right away that something had changed because my hair was smoother.  Then when I went to brush it out while it was still wet, it brushed much easier.  As it dried, it was quickly noticeable that all of the rust color was gone - my blonde color was back!  For real.  I should have taken a before and after picture of the ends of my hair.  So, I think I'll do this treatment ever 2-3 week just for up keep.

I also learned that this same product will clean rust stains out of your shower :-)  Again about once a month I use Iron Out to spray down the shower and take away any build up.  Iron Out works like a dream but stinks to high heaven.  Well, the bowl that I used to mix up the paste, I had set on the shower floor upside down.  When I picked it up later, that circle was completely clean HA!  I think I'll be cleaning my shower with Lemonade mix from now it - it smells SOOO good!

Before you ask the question, "If it can clean like that think of what it does to your stomach."  We all sing the praises of such products as baking soda and vinegar for cleaning - yet we all cook with them and, therefore, eat them.  :-)