Normally, my Tot Time posts are about the things we did or learned over the past week.  I must admit, we were lazy last week.  We played some games but nothing new and I didn't do much planning.  So instead, I thought I would share a few pictures of Josh's new bed.  We had decided that we wanted to move him to a twin bed for his third birthday, which is right around the corner.   We didn't realize how completely thrilled he will be!  I plan on sharing a post a little later when the room is done with all of the details but I wanted to share some great pictures today! 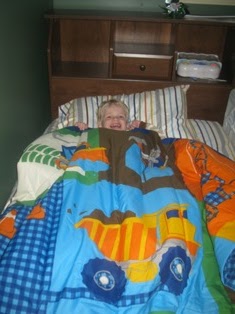 Josh was so excited about his new big boy bed that he went to bed an hour early.  Just look at that smile!  He had no reservations with this new set up! 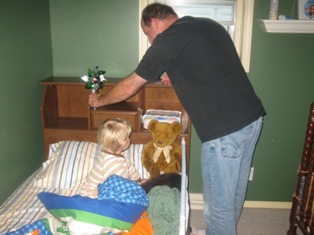 We set up his little radio, pinwheel, and bears/blankie so he was all ready to go to sleep. HAHA - he's telling us to get out so he can go nite-nite.  The best part?  We never heard him after we left the room.  I think he will sleep very good tonight. . .or at least I hope so!

We still have some work to do and I have some art work to finish up for the walls but at least the bed is done!  We'll be moving Josh's crib, which is the nicer of the two cribs, into Nate's room so he'll get a change too!