Happenings in this House

It's been quite awhile since I've posted a "Happenings in this house" post.  There is no reason other then I was posting pictures in other posts so I didn't really have a lot to share :-)  I went looking through photos from the month of November, since we are almost half way through this month and I'm going to post every single picture I've taken of our family.  Seriously.  Don't worry, there are only 4.  Can you believe it?  I did take pictures at a Bridal shower but that isn't my family.  I have no idea why I haven't been snapping photos other then life is pretty simple right now but, I also know the holidays are coming and there will be TONS of photos!

This weekend, we stayed home.  We spent time on Saturday cleaning out stuff from our basement and finally getting the area organized that we had to "gut" due to mold.  We are done for now.  There is still more tear out that technically needs done but it isn't top of our list right now.  It's much more minor compared to the original project.  We took the  boys to get hair cuts (much needed haircuts!) and also Darryl and Josh cleaned up the garage so we can park a vehicle in there when the weather gets bad this winter.  That's it :-) 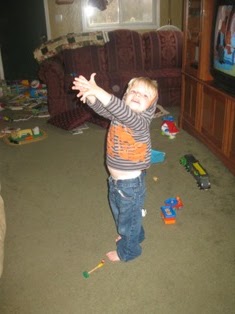 Josh has recently discovered that he can pull his shirt over his head and he has a "hat".  At first I thought he was saying he was "hot" and wanted his shirt off but, no, he was just having fun.  Today he discovered his hood on his sweat  jacket and thought it was fun to walk around with that on his head too. 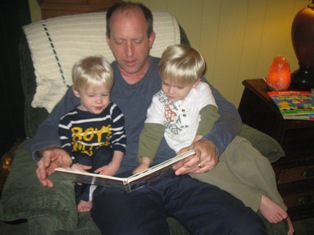 Reading.  Every day.  Many, Many times a day.  The boys LOVE to be read to - we hear "read, read, read" lots and lots throughout the day.  I think I have "Goodnight Moon" memorized now :-)  I'm not complaining - I'm glad that they to read.  I also catch them reading the books themselves which is just so adorable and yes, they have a few memorized too! 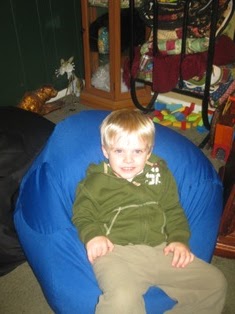 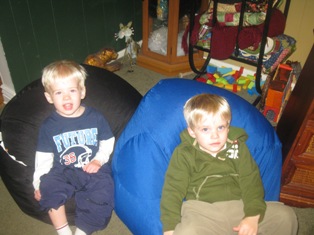 Today, while Darryl and I watched football, we set the boys up with their bean bag chairs and their current favorite video (Boz ABC and 123 - Boz videos are FANTASTIC!) using my computer.  They loved it and we actually got to enjoy football which has not been the case the last few weeks.  I must confess the first photo of Josh - we took to send to Jon Gruden.  He used to be a football coach and is now a commentator but we think Josh bears a striking resemblance.  We thought it would be fun to send him a picture :-)

So, that's what is happening in our house right now :-)
Posted by Jackie Koll at 10:13 PM No comments: