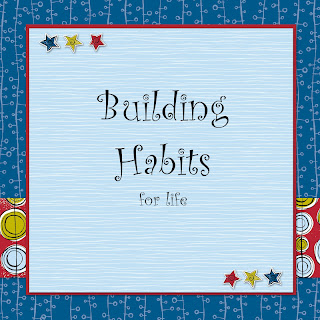 One of the things I've been working on is habits.  We all have them - good and bad - but sometimes we need to work on building new habits in our daily life. Right? Or is it just me?

This is something I've been working on for several weeks; I wanted to already have a few in place before I posted because, well, no one likes to fail in public ;-)

The Kitchen Clean-up - Completed!
I know that I have mentioned it before - specifically, I remember it coming up last year in my Simplify goals.  Our kitchen is our main entrance to our home so I really have to work to keep it looking nice - it is so easy to allow things to pile up.  Everything from bags to shoes to dishes take over it quickly.  In the beginning of August, when it finally cooled off enough to . . .well, stay alive, I spent an entire morning in the kitchen - cleaning off the counter tops, cleaning out cupboards (just a little), wiping down all of the appliances and cleaning the floor.  My habit was to keep it that way.  Yes, it takes a few more minutes after lunch and after dinner to make sure that everything is put away even when it means carrying something to another room.  Normally I clean the kitchen on Tuesday but keeping it clean for the whole week is just a matter of a habit.  I can say that this IS a habit now.  I find myself throwing out the cheese wrapper at 3:00 AM when I make my husbands sandwich instead of leaving it on the counter to throw away later.  We had one weekend recently where, well, I fell off the wagon.  Between running out of Dish Soap for the DW and then, while hand washing dishes . .  a waterfall erupted under my sink . . .the dishes piled up.  (Here's a secret - I detest hand washing dishes . . .so I waited an extra day until I could buy soap and just ran everything through the dishwasher!!)  So check this habit off :-)  Yippee!

Drinking Water and Planned Snacking - In Progress
This is my most recent attempt at a habit.  Call it needing to be healthier if you want but really, I just need to change habits.  So, beginning the first week of September, I made it my new habit to drink more water and change my evening snack plan.  As far as the water - I have a water bottle that is just for water (I got the boys their own so they wouldn't take mine!).  Right now, I'm working on drinking 2 a day.  What else do I drink during the day?  1-1 1/2 cups of milk for breakfast, a Diet Sprite for Lunch, and usually Crystal light for dinner.  I'm trying to avoid pepsi right now only because it became my "coffee" this summer and I found I was back to drinking at least one bottle a day instead of limiting to certain times when I really want one (like when eating pizza!) This means that at night, when I want something - I'm retraining myself to drink water too

Even though I normally try to do one habit at a time, I also added my evening snack into this habit.  I love Ice Cream.  I will not lie ;-)  It's a family trait, ask my dad :-)  My husband eats a yogurt every night for his snack - he has such will power!  So, I've thought long and yard about my snack at night and right now, I am trying to make it my habit to have either a Yogurt with some animal crackers (for that crunch!) or a Pudding (they are fat free after all!) with a graham cracker.  Beyond that - water  . . .not nearly as tasty as Ice Cream but it is better for me.

After two weeks . ..ok, lets be real, only one week.  I planned to start this September 1st but . .. I was working so hard on the boys room and it was so stinkin' hot that I drank more Pepsi than water and seem to recall having a few late night snacks ;-)  I'm on the wagon this week though - I will admit that I am having a hard time drinking water but I'm trying :-)

The Master Bedroom - Completed
I'm trying to establish habits for each room in the house so the next logical room was the master bedroom because we just "moved into" our new room so it makes sense to work on keeping it nice and clean.  Since moving in three weeks ago (so 21 days give or take a day) we've worked hard at putting things away and doing some finishing touches to make it easy to keep it clean. (Command hooks to hang things on, a rack on the door to hang things like PJ's, and a basket to put some thing at the base of the closet so they don't get lost.  We love our new space and I find that I WANT to keep it nice and clean.  Yes, mom, I even make the bed almost every day :-)

The Dining Room - Brand New Habit!
The next room I'm building habits in is the dining room - i.e. the drop zone.  I don't care where your dining room is, you can bet that at some point in the week (or day!) you have something sitting on your table that doesn't belong.  So what are some of things I'm working on?  Wiping down the table after every meal instead of just dinner (I know - I always forget after lunch!!!)  Really, I'm working on having a total of 8 table clothes - I love table clothes but with kids they only last one day without looking icky - so I want 8 - after dinner every night I can take the dirty one off and put a clean one on for the next day.  I also am working at keeping the piano clean and sweeping the floor every night after dinner.  That room grows cats and dogs in the corners - it's like all of the lose hairs know that is the room to go to!

So, one little habit at a time, I'm working on making some changes :-)  What about you? Do you have some habits you need to change or establish?
Posted by Jackie Koll at 8:00 AM No comments: