With Easter just a few days days away, I wanted to share a couple of recipes I've tried recently that would be great for an Easter Brunch (or anytime!).  I'll be honest, as I was cooking both of these items, the thought ran through my head that this meal was going to be a total flop . .. but, in the end, they were both good and the kids LOVED them.  (Isn't that all that really matters?)

First up is something I can't even believe I even considered making - it is called Apple Cinnamon Croissant Bread Pudding.  Now, Darryl and I do not like Bread Pudding.  End of story.  So, why in the world did I try this?  Well, we do like Croissant's . . and Apples.  But, we were both very surprised to discover that we liked it!!  I viewed this more as the "egg" dish for our meal since, that is what it really is :-)

The day before serving, generously butter a deep 2-quart baking dish. Line the bottom and sides of the dish with some of the croissant slices, starting with the bottom and cutting and trimming the croissants as needed. Leave a little edge of croissant extending above the rim of the dish to support the pudding as it puffs.
In a mixing bowl, whisk together the eggs, milk, ½ cup sugar and vanilla. Pour half of the milk mixture into the center of the bread-lined dish. Top with a layer of the apples slices and the raisins, and then cover with a layer of croissant slices. Repeat until the dish is filled, ending with a layer of the croissants. Set the dish on a plate to catch any overflow, the pour the remaining milk mixture over the top. In a small bowl, stir together the cinnamon, nutmeg and remaining ½ cup of sugar; sprinkle over the top, then dot the top with butter. Cover and refrigerate until all the liquid is absorbed, 6 to 8 hours or overnight.
Preheat oven to 350'. Uncover the dish and place in oven. Bake until top is browned and a knife inserted into the center comes out clean, 45 minutes to 1 hour.
In a bowl, whip the cream until it starts to thicken.
Serve warm and spoon some of the lightly whipped cream over each serving or in a bowl alongside 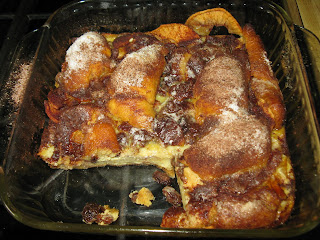 When I saw this come out of the oven, I was not impressed LOL  So we had to taste it before I even took a picture!  It really was very good.  I did a few things different from the recipe.  One, I cut it in half and made it in an 8 x 8 pan.  I knew there was no way we would eat a full size recipe of this bread pudding.  Also, I couldn't find the big croissants rolls so I just baked up a tube of Pillsbury croissants.  Because of that, mine wasn't as "bready" as it would have been - I couldn't cut the rolls in thirds meaning that my layers were a little "weak" :-)  As I said, the boys loved this - they even had it for lunch the day after.

The second recipe was our "meat" dish and was the Sausage and Apple Braid.  This was very good and very easy to make - the flavor will be determined by the type of sausage you use, so make sure and use your favorite.

SAUSAGE AND APPLE BRAID Serves 6 to 8
1 sheet of frozen puff pastry dough, thawed, but chilled
10 ounces pork sausage
1 egg beaten
½ teaspoon black pepper
1 onion, very finely chopped
2 small apples, grated
¾ cup dried herb stuffing mix
¼ cup finely chopped parsley
2/3 cup grated cheese, Cheddar, Gruyere or Swiss
Beaten egg for brushing
1 tablespoon sesame seeds
Preheat oven to 400'. Roll out pastry to an 18'x 14' rectangle and place onto a greased cookie sheet. In a large bowl, mix sausage, 1 beaten egg, pepper, onion, apples, stuffing mix, parsley and cheese. Spoon filling down center of pastry, leaving about 2 ½-inches of pastry at top and bottom and 4 inches on each side of filling. Brush edges of pastry with beaten egg and fold the top and bottom of pastry over the filling. Make 3-inch cuts at ½-inch intervals down each side of pastry. Fold 1 strip over filling from alternate sides until filling is completely enclosed. Crush with beaten egg and sprinkle with sesame seeds. Place on a baking sheet and bake in preheated oven 30 minutes, until golden. Serve hot or cold.


A couple of things I learned when I made this recipe.  One, don't forget to put the cheese in !! ha!  After I had braided the dough I realized I had forgotten it so I unbraided it and just put the cheese on top.  Two, the recipe calls for 10 oz of sausage, I just threw in the whole roll which is 16 oz . .. it will have to cook about 15 minutes longer if you do this in order for the meat to be done.  I would also recommend letting it cool for a bit - it firms up a little more and is actually better when it is cool.

Posted by Jackie Koll at 7:41 AM No comments: