This past week brought some really fun things! 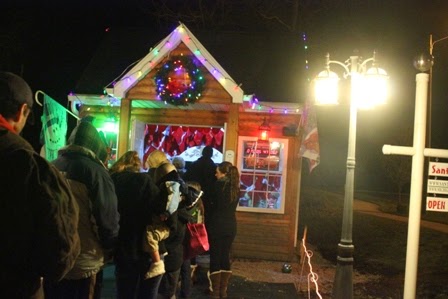 There is an official Michigan Santa house not far from us and we finally were able to go see Santa.  I've wanted to take the boys for two years but, one year we were so super sick that we did nothing and last year the boys said NO! to Santa.  This year, they were beyond excited and Santa and Mrs. Claus did not disappoint. 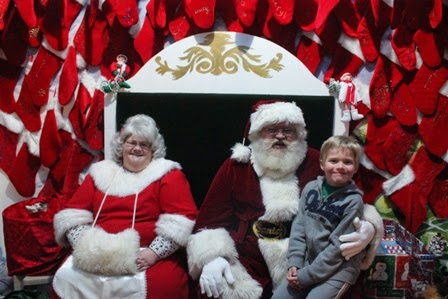 Josh had zero fear.  He walked right up to Santa, talked to him and told him exactly what he wanted - LEGOS!. 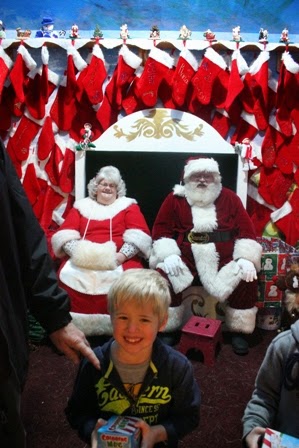 Nate, on the other hand, hid behind me.  He wouldn't get near the big guy in the red suit so I managed to snap this photo as we were leaving. 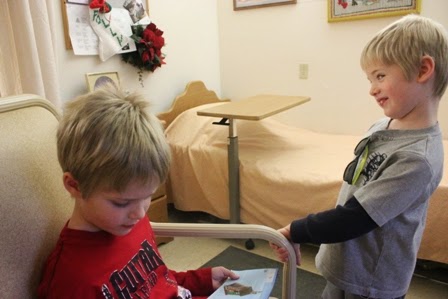 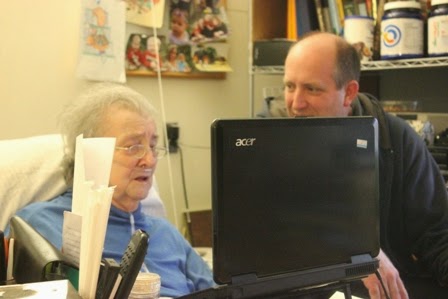 Darryl and his grandma - she is 94 years old (soon to be 95) and yes, she is using a laptop, remembers just about everything from her life, has amazing stories and has all of her senses.  It's pretty amazing when you think about it.  She lives in a nursing home since she is unable to walk but otherwise, she's as alert as anyone else. 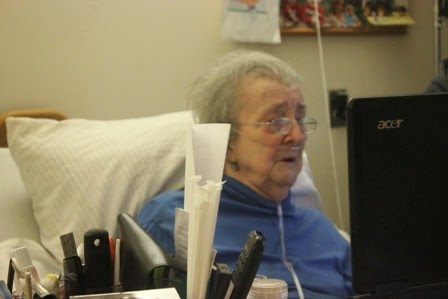 This year, the family decided that we would each take time to visit Grandma individually instead of trying to hold a Christmas party at the nursing home as we have in the past (which, honestly, isn't a lot of fun).  This way, Grandma can visit with each family and the focus be more on her instead of all of us just sitting around trying to talk and not be bored :-)  It really was perfect.  The boys had made a snowflake ornament for her and she loves homemade gifts so those were perfect.  Darryl and I took her a container of my homemade cookies, again, something she enjoys - homemade food!  We were there about 2 hours and the boys did great - we played "I spy" and then went for walk to get some water from a water "tank" - the boys loved watching the bubbles and, like always, the old people love seeing those two blonde boys walk down the hall.

After leaving the Nursing home, we went to Red Robin for dinner.  There's a reason we go to Red Robin . . .because the fries are free and Nate loves to just eat fries for dinner.  It saves us some money.  Throw in the fact that Darryl had to return his burger because it was ice cold . . .it cost us less to eat at Red Robin for four of us, than it does to eat at McDonalds HA! 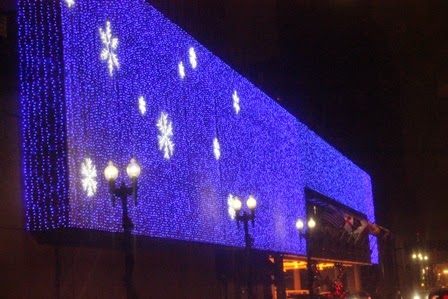 We then headed downtown Grand Rapids to see the lights  This huge blue and white display is on the side of the Amyway Grand Hotel and the picture does not do it justice.  It literally took my breath away! 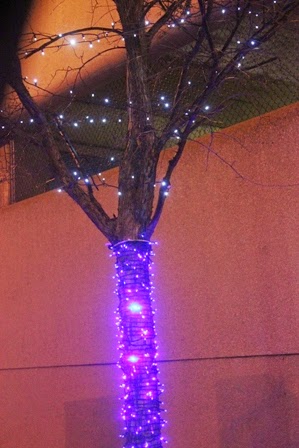 The Trees were beautiful too!  So many lights. 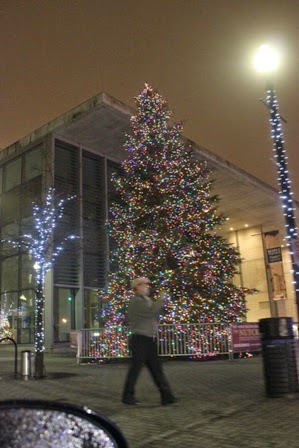 This was the huge tree that is downtown by the Ice Skating Rink.  The whole area was so nicely decorated. 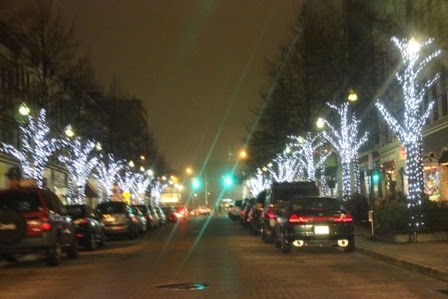 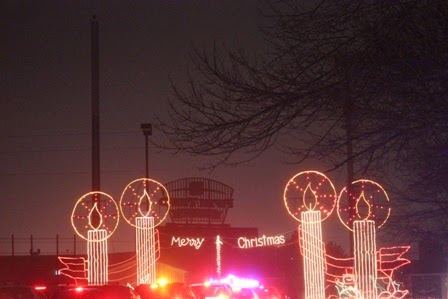 From there we headed to the "Largest Light Display in Michigan" at the Fifth-Third Ballpark.  It is a mile long lighted drive through the ball park and it was beyond amazing.  This will be a family tradition without a doubt! 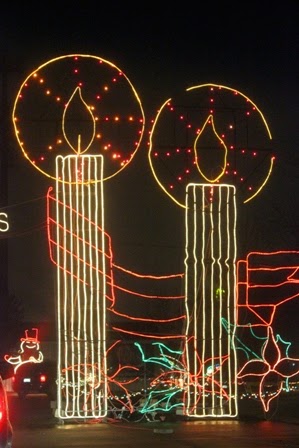 One of the traffic guys told us that they work on setting this up for three months and have been doing it for 16 years.  It's pretty amazing. 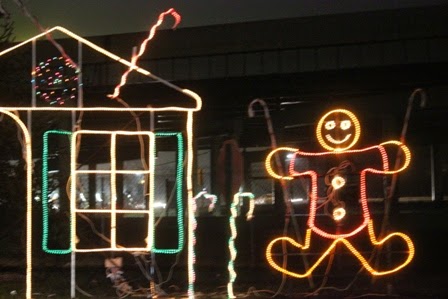 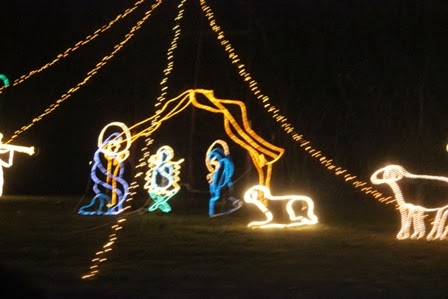 The "Activity" was pretty amazing (Aka The Nativity!) Don't you love that blue tunnel?  There were several tunnels throughout the drive -some with moving lights and some just with tons and tons of lights like this one. 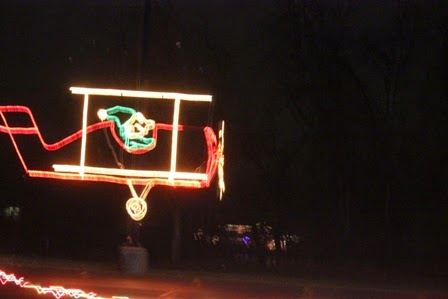 The boys loved the Elf flying the airplane. 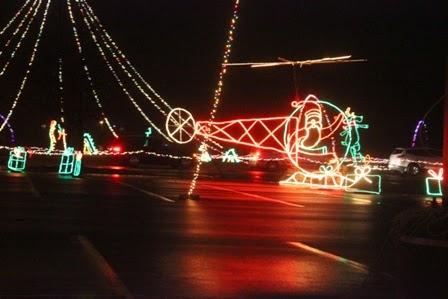 The Helicopter was another huge hit. 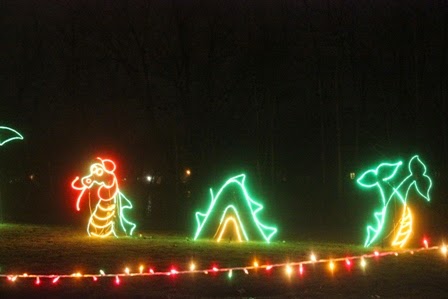 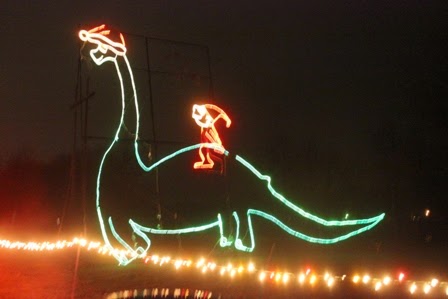 Dragons and Dinosaurs always are a hit with the boys. 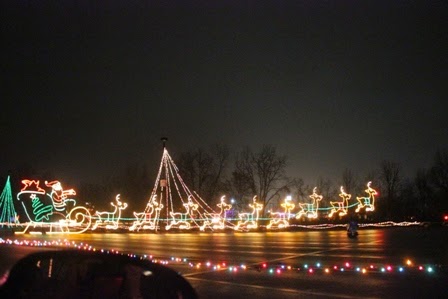 The light display wouldn't be perfect without Santa and his Reindeer!

Another perfect weekend!
Posted by Jackie Koll at 7:00 AM No comments: