This year, we stayed home for Christmas and my parents came over on Christmas Day.  This is the first year the boys have really gotten into the full excitement of Christmas so staying home turned out to be such a fun thing.  Plus it was nice to not have to re-pack and unpack all of the gifts :-) 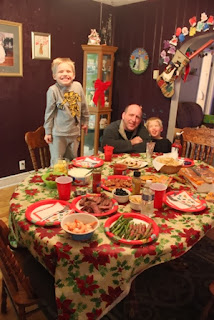 We started out our Christmas Eve fun with our annual meal of Appetizers.  This year was a little different because I had to think a little outside the box and come up with some non-dairy type things (no thick and rich cheesy dips!)  We had Beef Tenderloin mini-sandwiches with Honey Dijon Mustard (which are a new favorite!), asparagus wrapped in prosuitto (next time I would just use bacon), Shrimp Cocktail, Chips and Salsa, Chips and Hummus, Fruit with Fruit Dip (for me!), and Bacon Holiday Crackers (recipe coming soon!) Josh ate a little of everything and Nate ate Chips and Salsa :-) 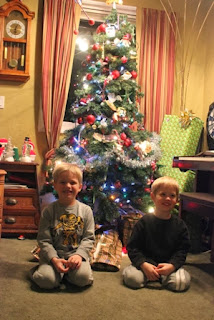 The boys waiting to open their Christmas Eve gift. 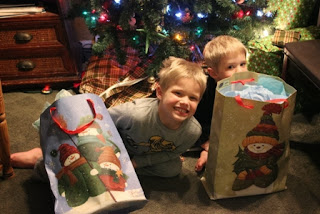 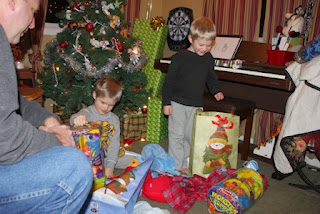 For Christmas Eve I like to give them Christmas PJ's, new Slippers and a toy.  This year I found these "build your own monster kids" on a daily deal on Amazon and was sure the boys would love them.  Well, apparently I am not good at Christmas Eve Gifts!!!  Josh did play with his Monster for a few minutes but Nate said, "I don't want to do this you can do it mom". HA!  Oh well, I think they will grow into the idea of the monsters eventually. 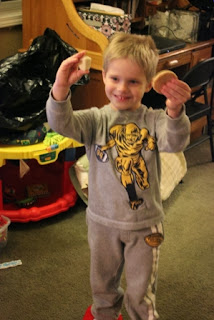 The boys were very interested in the fact that Santa would be coming to the house so they set out snacks for him and his reindeer.  Josh picked out the cookies and even got the plate down from the cupboard (which I didn't even know he was doing until after the fact - the kids can now climb on the counters!). 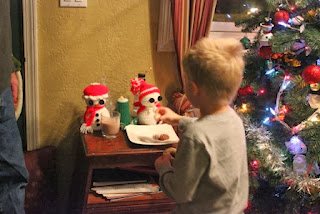 He even carried the cup of Chocolate Milk by himself (but I actually poured it!) 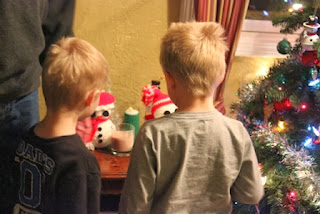 The boys checking out the treats. 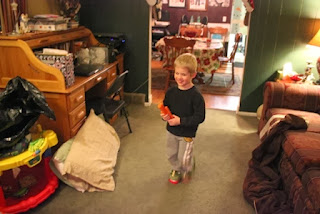 Nate found some carrots - lots of carrots - for the reindeer. 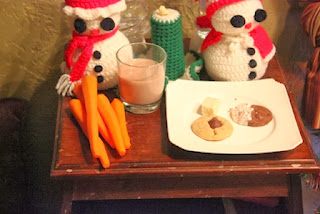 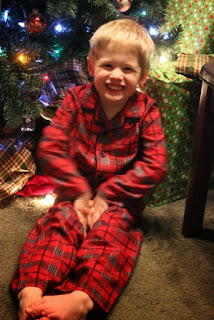 Nate - he loves to pose for me and give me big smiles. 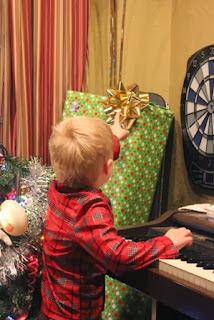 The amazement of Christmas  -- "Mom, I just need to feel that bow!" 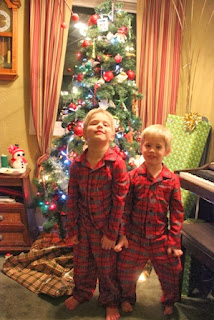 The boys in their new Christmas PJ's.  Nate told me that he could hardly stand and so that is why he has bowed legs and Josh is into making faces :-) 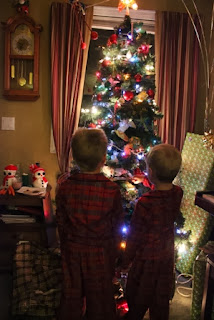 A family tradition from my Childhood - Facing the Tree with their backs to the camera.  What you can't see is that they are discussing ornaments on the tree which is super cute. 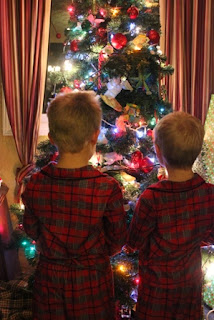 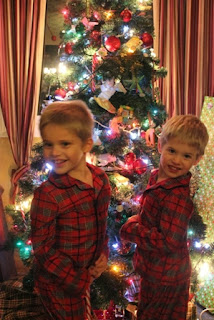 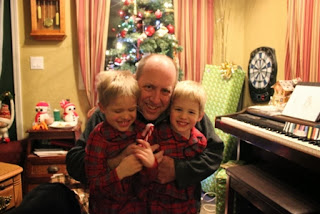 Darryl and the boys. 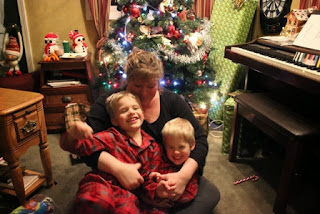 Me and my boys! Josh is becoming a photographer and directed us for this photo.  I love it :-)  Darryl kept trying to give me a kiss and just as he would kiss my cheek, Josh would stop taking pictures and would say, "All Done!" 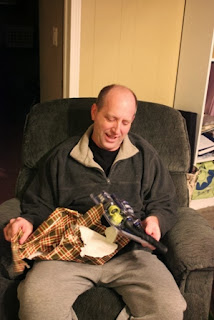 Darryl and I did something new this year; we decided to have our Christmas together on Christmas Eve after the kids were in bed.  This allowed us to have a conversation uninterrupted and just enjoy a quiet evening.  This year we each had a small amount of cash to spend on each other plus we were re-gifting one gift and we were supposed to do something creative.  I was able to get Darryl a flashlight he wanted, a Charcoal Chimney for our grill, and some headphones - I love Amazon Daily Deals where things are 50% off - it enabled me to get a little more then I would have been able to get :-)  Darryl got me a flashlight (I wanted a mag light of my own that no one else gets to take!) and a Panini Sandwich maker. 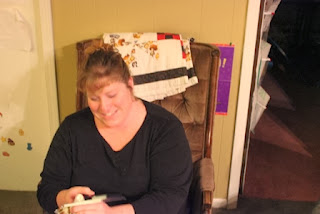 The re-gifts?  I gave Darryl an external hard drive.  I had two - a smaller one that he had given me 4 years ago then I have one with tons of storage on it that I got with Birthday Money this spring.  He had been waiting for me to clean off the small one so he could use it.  Now, he finally has it!  He gave me a magnifying glass - he figured I could use it for doing small crafts and scrapbooking - and he is right! 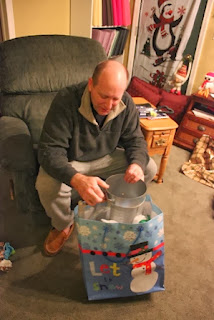 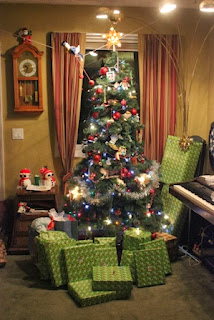 We relaxed for awhile (and made sure the kids were sound asleep!) before we put out their gifts.  Last Saturday, we took the boys out shopping.  They shopped for each other and for Darryl and I.  Darryl took them to the dollar store to shop for each other and me and I took them to Walmart to shop for Him.  To say they had fun is an understatement.  Their favorite thing?  Shopping at the dollar store because they had $10.00 each to spend on me and their brother.  It was cute to see what they had picked out for me - and they had a reason for every item.  It warmed my heart to hear them talk about the things when I unwrapped them Christmas morning.  They wrapped their gifts (with Darryl's help) on Christmas Eve Morning. 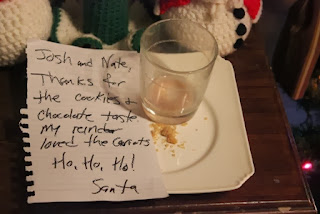 Santa left a note for the boys :-) 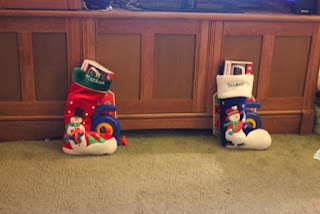 The stockings!!!  I think I have more fun packing the stockings with fun things then the boys have pulling them out.  This year they each got a clock for their bed, a funny little stuffed toy that squeaks, a bath toy, a clothing item (Josh got boxer briefs which he REFUSES to wear and Nate got a t-shirt), a big tape measure and a Sticker Book.

We knew the boys would be up early so we put our alarm clock in their room and placed a piece of paper on it with the # 7 on it and told them they could not get up until the # on the clock matches the number on the paper.   I heard them up at 6:30 so I got up and took a shower . . .then Darryl and I sat in the living room with just the tree lights on . . .the boys opened their door right at 7:00 ready for the fun to begin!
Posted by Jackie Koll at 7:00 AM No comments: