I would count last week as a success with Preschool and K-4.  We did not get through everything I had planned but we did school Monday-Thursday and are slowly getting into a routine that seems to be working.  I'm seeing some areas that I need to work on when it comes to one-on-one time for instruction as well as the simple fact that we need flashcards for the two in Preschool to review numbers, letters, and colors.  We missed Friday school this week due to sickness - Fevers, Lots of Snot and a middle of the night puke fest due to the snot and coughing - not fun :-( 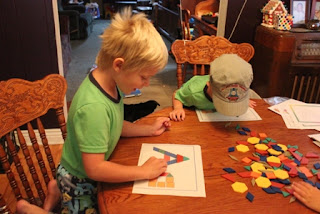 The boys have always loved the Tangrams so using the letter puzzles from the curriculum that comes from Confessions of a Homeschooler are always a big hit.  Not only do they practice the letter shape, they also review colors and shapes. 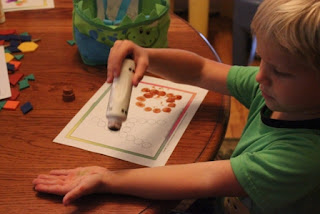 The Dot-to-Dot pages are a favorite too.  Yes, the boys always have to stamp themselves at least once during the process too.

Josh has his own curriculum for K-4 but he also loves doing the same thing as the younger two boys.  This week I tried to pick out the things he would really love and allowed him to do those on top of his own work.  He was a much happier camper this week! 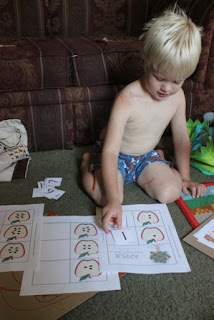 We had record breaking heat this past week which meant that for a couple days, we were "trapped" in the living room where we had some A/C.  It also meant staying in PJ's and no shirts for the boys HA!  Nate enjoyed this counting activity - counting seeds on an apple.  I liked that it gave him a challenge when he got to numbers 9 and 10 - he had to count the tiny seeds very carefully to get the right number. 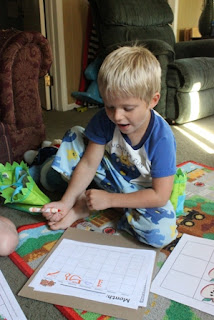 Josh is working on filling in numbers on his calendar. 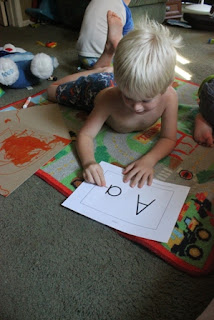 One of the things I love about the curriculum I'm using for the boys is the variety of activities.  The boys had to use a toothpick to poke through the letter.  It was fun to see their faces when we turned the paper over and they could see the "pokes" better. 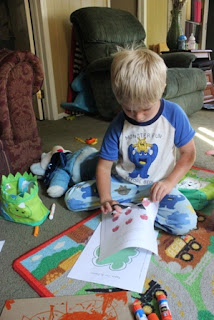 Cutting practice is a must!  Along with some good old fashion paste :-) 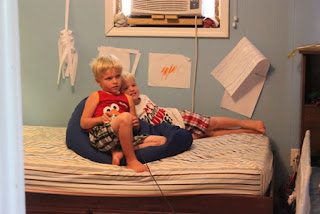 This has nothing to do with school but, I've been waiting for this day!  We set up the Game Cube for the boys to play; when I checked on them later, there they sat, on Josh's bed with the bean bag.  I love this! 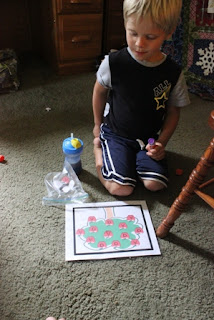 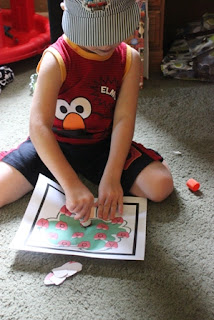 A classic matching game of upper and lower case letters 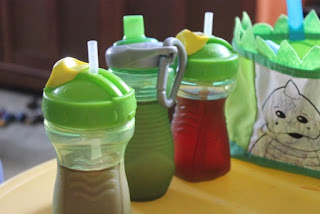 My child has a drinking problem HA!  Nate said he was thirsty and wanted all of his cups. 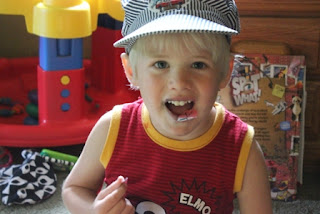 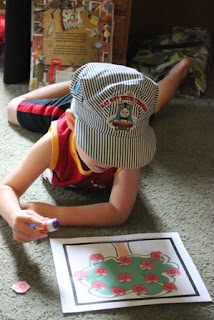 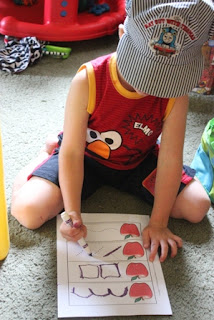 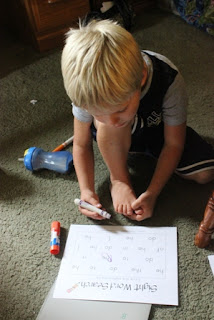 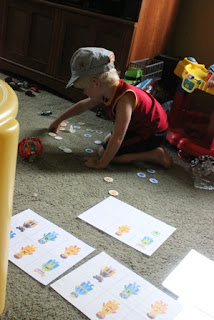 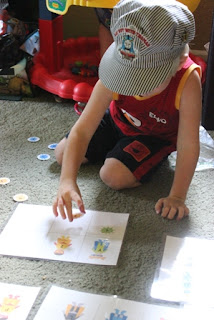 This is one activity that is not from our curriculum but an idea I found on Pinterest.  The printable can be found at B-Inspired Mama.  My kids thought it was fun but I think I'll add some velcro to it so that the letters will stay in place :-) 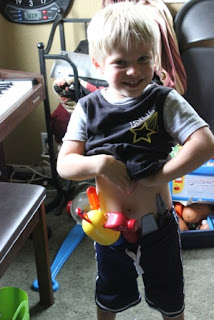 One last fun photo - I think Josh needs a tool belt for Christmas :-)