It is that time of year - the time for Christmas Parties and Family Gatherings.  Normally, we really don't get that busy but this year we have at least one activity going on every weekend!  This past Saturday was a first for us - Darryl's mom hosted a Family Christmas Dinner.  For a little background, Darryl's grandma, who is 91, was house bound for years and now resides in a nursing home.  Because of that, the family Christmas party on his side has been held, first at his Grandma's house, and now is held at the nursing home.  We never got to have a nice Christmas dinner with just the family with all of the lights and a tree.  Belva, my mother-in-law, really wanted to change that so she planned the family dinner.  It was nice to get together with everyone - we don't do it very often - it was even nicer to not be at the nursing home!  (We will be having our actual family Christmas with his grandma later this month)

We had a very busy day - it started with a trip to the Photo Studio to get Nate's 2 year photos done as well as to do some Photos with Santa (AKA as my husband hahaha).  We had  about an hour to spare so we came back home and the boys all played while I made my "Fancy Green Beans" for dinner.

Dinner was wonderful - my mother-in-law cooked a big Picnic Ham along with Sweet Potatoes with marshmallows, Garlic mashed Potatoes and Gravy, made by my brother-in-law, Craig.  She also made some type of "Fluff Stuff" but I didn't taste that.  We also had a great spinach salad that my niece made.  For dessert there was Strawberry Rhubarb pie, Dump Cake, Cake Balls, and other fun snacks.

Other then that, we just all sat around and chatted, played games, or just relaxed.  The boys were fantastic.  I don't know about you, but some days I think that I must be a complete failure as my kids mom because they do NOTHING that I'm trying to teach them.  HA  So, when we go out for a day like we did on Saturday, and I can sit back and watch them play together, be courteous, clean-up and obey everything we ask of them, I realize that I AM getting through to them and at home, it is just different.  Here are a few pictures from our day.  (I must confess, I took very few photos - which is unlike me - I guess I was just too relaxed :-) ) 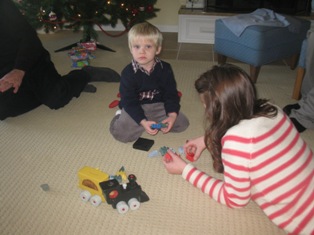 When we first got there, our niece, Rachel, was working on some puzzles that Charlie (my MIL's husband) had made out of wood.  Josh loves Rachel so he got right down on the floor with her.  It was so cute - she was going to quit the puzzle she was working on and Josh said "It's ok, just try, try again.  You can do it" HAHAHAHA!  I should mention that Rachel is not a huge fan of kids but my boys both adore her and she is actually very good with kids.  :-) 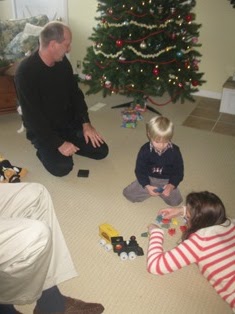 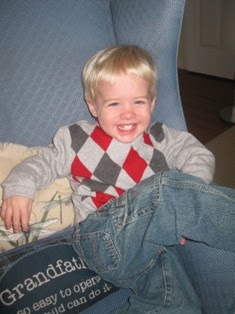 Nate was just hanging out in the chair.  It was adorable because he would disappear into the spare bedroom where the toy box was and we wouldn't hear anything from him for awhile.  We would check on him, and he would have toys out and all lined up on the floor.  I think he just had a blast being able to play without anyone bugging him. 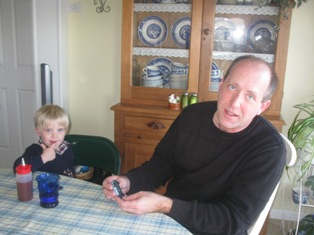 Matchbox cars were the toys of choice even at Grandma's house - by boys of all ages. 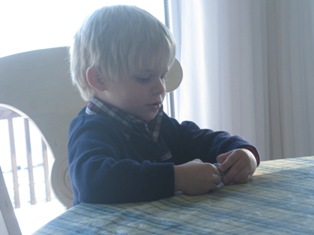 Josh playing with cars - he was very intent :-) 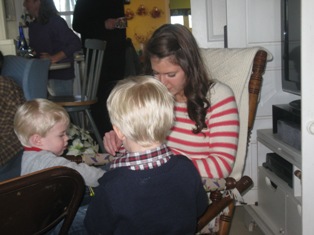 Once again, the boys were glued to Rachel.  She had brought out this little magnetic fish game - the fish open their mouths and you have to try and catch them.  She entertained Josh with that game for probably an hour - then when she was done, he brought it to me and we played it more.  I'm seriously thinking about trying to find that little game to keep on hand when we go places! 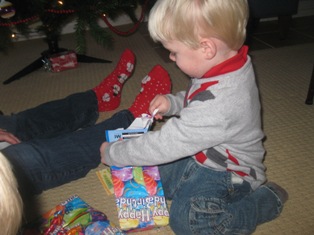 My MIL will be unable to attend Nate's birthday party so she gave Nate his gifts.  The boys have figured out "gifts" now so both were very excited to open them.  (We are still working on getting Josh to understand when it is Nate's turn - he likes to think all presents are His!!)

On the way home from the party, we got to look at Christmas lights and Josh loved it.  I would say "Look More Tissmass!!" Then we would be on a stretch of road with no houses and he would ask "Where is all the Tissmass?".  We even drove through a town that had tons of lights up and a large Nativity set up - he loved it all.

The boys got to do something new on Sunday - check out these photos: 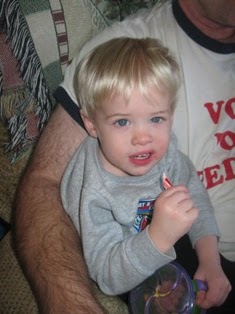 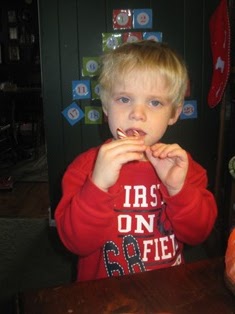 Can you guess what it is?  They had their first candy canes!  Nate inhaled his one crunchy bite after another where Josh ate about half of his and then said "it is sticky" and handed it over to me. HA!
One last little story - today, Josh tattled for the first time.  I've been working with both boys, but especially Josh, on the concept of obeying.  Today, Josh walked into the living room and told me "Eat (Nate) playing with water.  He is not obeying" LOL  And guess what HE WAS RIGHT!  Now, if only I could get Josh to obey all the time - it would be a success :-)
I hope that each of you are enjoying this Christmas season!  My big projects this week are to put the finishing touches on a birthday party for our soon to be 2 year old and to make Christmas Cookies!
Posted by Jackie Koll at 10:00 AM No comments: