I made this for dinner tonight and we really loved it alot.  It is really easy and so tasty. 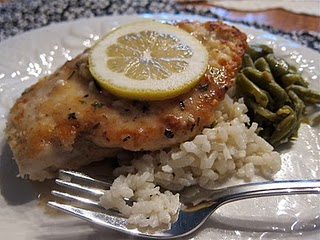 Chicken:
Sprinkle chicken with salt and pepper. In a dish add 2 cups of flour- coat each chicken breast with flour. Melt butter and oil in a large pan on med-high heat. Add chicken and cook on each side until lightly browned and cooked through. Take chicken out of pan and set aside on dish.
Sauce:
Leave the remains in the pan you cooked your chicken in. Add 2 tsp of flour to make a paste, then add 2 cups of chicken broth. Let simmer for 5 mins or until it begins to thicken. Add lemon juice, basil and parsley.

Pour sauce over chicken and enjoy.  Serve with rice, noodles, or risotto.

This recipe came from Comfy in the Kitchen

My Notes:
* I really only have one note.  Due to my first batch of rice not cooking (not sure what happened!) my sauce had to sit for 20 minutes while I cooked a second batch of rice.  When I had first tasted the sauce I thought it was very "lemony" but letting it sit for that time allowed the flavors to blend and it was soooo good!  So, make the sauce and let it sit for a few before serving.
Posted by Jackie Koll at 8:49 PM 1 comment:

Email ThisBlogThis!Share to TwitterShare to FacebookShare to Pinterest
Labels: Recipes

Today is Day 11 over at A bowl Full of Lemons 21 day organizational challenge.  You can check out this post to see my other 10 days of organization.

So, Day 11 on A Bowl Full of Lemons is the Freezer, but honestly, my Freezer is clean.  For one, I don't have alot of food and secondly, I clean it out every week before shopping so I know what I have :-)  So for me, Day 11 was going back to the dresser drawer.  So check out the before and after:


I"ll be linking up over at:

Email ThisBlogThis!Share to TwitterShare to FacebookShare to Pinterest
Labels: Organization

Last week I made a Taco Soup that was really good so that has me on a little bit of a Soup/Stew Kick.  I went searching for something to make this week and came across this recipe for Brunswick Stew - I had never heard of it or tasted it but it sound good PLUS it is a slow cooker recipe!  (I do not have a recipe for the Taco Soup because it was from a packet that I bought at a Craft Show this summer - it was very yummy!)

Heat the vegetable oil in a skillet over medium heat and brown the ribs on all sides.  Transfer to a slow cooker.  Place onion in the skillet, cook until tender, and transfer to the slow cooker.   Place the chicken in the slow cooker and mix in tomatoes, ketchup, steak sauce, cider vinegar, Worcestershire sauce, hot sauce, lemon, chicken bouillon and pepper.  Cover and cook 6 hours on high.  Remove ribs, discard bones, and shred.  Return meat to slow cooker.  Mix in corn and Lima beans, cover and continue cooking 2 hours on high. 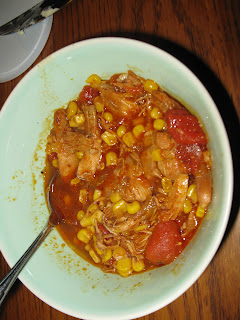 This was SOOOOO good!  I was very happy with this recipe :-)

Now with that said, here are the things I did differently - more than usual, actually, but it was still basically the same:
1) I did not buy ribs - instead I found what pork was on sale which was a package of thin cut boneless chops.  They worked perfectly - I browned them and put them in whole; after a few hours, they were tender enough to shred.
2) I did not buy a whole chicken - again, I price shopped and bought a package of chicken thighs instead.  I actually put those in the crock pot first thing in the morning to cook for a few hours; than emptied the crock pot, shredded the chicken to use in the recipe.
3) I did not have any lemons so I used 2 Tablespoons of lemon juice instead
4.) I mis-read the size of the tomato can needed so I only had a small can of tomatoes but it was still really good.
5) I did not use hot sauce - Darryl isn't a huge fan of hot sauce in recipes.

When I make it again my husband asked that I cut back on either the steak sauce or the vinegar because he felt it was too tangy but still really good.  I liked it the way it was but it was tangy too!
Posted by Jackie Koll at 8:03 AM No comments: