Too Cute Not Too Toot!

First up is a cute idea I've seen done with candy corn but I wanted to share this tutorial from A Turtle's Life For Me because she DOESN'T use candy corn.  I don't know about you, but I can't seem to find candy corn after Halloween so if I don't stock up on it before then, I end up not being able to make cute things like this cookie idea.  I did actually buy candy corn this year but my kids found it and they LOVE "Tiny Toes" and ate almost all of them! 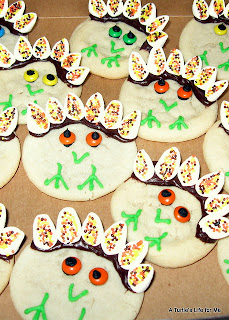 Wow - this week is a fail, is it not? LOL  I have just not be inspired lately by what I'm seeing out there either because it is the same stuff I saw last year or because there just isn't a lot out there right now.  I think everyone is in the same boat as I am - we are all working on other stuff and not focusing on crafts :-)

As and FYI - my "normal" Pinterest Challenge post won't go up on Wednesday.  I have a couple of things to wrap up on two projects before taking photos but I won't have internet access on Tuesday to add everything to the post.  We wanted to cut down our phone bill and get rid of our land line, which we did but, because we aren't under contract (after having the service for 8 years HA!) it was cheaper for us to "cancel" and then get the special rate for our same DSL we have now.  BUT, that means they have to turn off our service and then turn it back on and we were told we would not have internet service on the 22nd.  I'm hoping that they under promise and over deliver - meaning that we will have internet sooner then we plan!  We'll see :-)  I really don't spend that much time online during the day but, I do write my posts in the evening most days so . . .this week will be a little out of sorts :-)

That's all :-)  I can't wait to share THREE things from Pinterest with you on Wednesday though!  They are all fun and easy.

Have a great day!
Posted by Jackie Koll at 10:00 AM No comments: