I wanted to share this great date idea that my husband and I did awhile ago.  I find many date ideas on other blogs that I follow so I felt it was only right to share!

There is actually two parts to this date - the first part is something on going and the other idea is something you could do just one time and make it a theme for the night.

The first idea is to eat your way through the Alphabet.  It really isn't as bad as it sounds but instead, each time you go out, chose a restaurant that begins with the letter of the alphabet - beginning with A and working through to Z.  When we did this, it was tons of fun.  We tried restaurants we had never heard of - some were good and some were bad LOL  We only made it to letter J and life got in the way.  Sadly, now we go out so rarely, that we tend to go to our favorites :-)  When we did this, we took turns picking and would surprise the other one on date night.

On the very first date for letter A - Darryl got creative.  First, we went out to eat at Chinese Restaurant which we will never eat at again ;-)  After that, we went to the mall and had 30 minutes to wander the mall and find something for the other person that started with the letter A for $10.00 or less.  (you could go to Target or the Dollar Store even and have a lower budget).  I picked out the movie Airplane for him and he picked out a book called Attic Treasures for me. 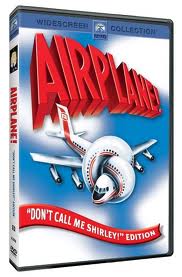 We  met back at Panera bread for Coffee/hot chocolate and give each other our gifts.  We  headed home and watched his move.  It was so much fun.

I also just read this "Dollar" date idea over at The Dating Divas which actually made me think of "our" date to share with you.
Posted by Jackie Koll at 8:35 AM No comments: