There is nothing better then a Christmas time Birthday.  It just adds to all of the excitement of the holidays and it is fun finding ways to celebrate.

Nate's birthday was Sunday so we had a small birthday party for him last week and then celebrated as a family on Sunday.  Originally we had planned to celebrate with the Grandparents on Saturday the 14th but we got hit with a big snow storm so we postponed it until Thursday. 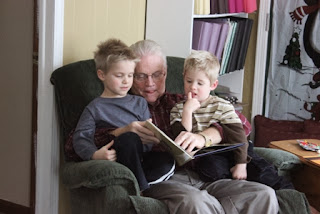 So, my parents came early afternoon and the in-laws came late afternoon.  The boys were so excited to have Nana and Papa coming over plus my Dad brought a new book to read to the boys. 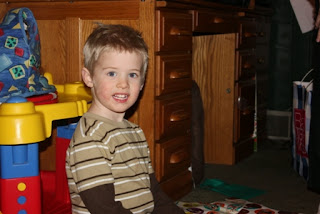 Nate, ready to open his gifts!  This was after dinner.  So, what did we have for dinner?  Only his favorite foods - Mac and Cheese, (blue box, of course), Hot Dogs (well, with some Chili, Onions, and other toppings for the adults), Fritos and Doritos and I added apples and dip even though Nate does not eat fruit ;-) 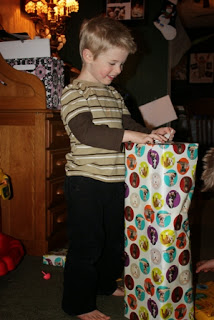 This gift was so fun because as he opened it he exclaimed with delight, "This is exactly what I wanted - I picked it out at the store!!"  And, he was right - it was  a Swamp People truck and trailer and is something he saw at the store and asked to get for his birthday. 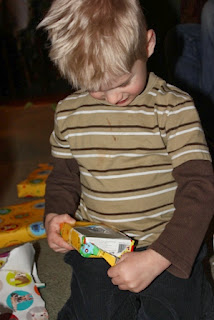 He got his own MP3 player . . .or phone as the boys call it :-)  Josh got one last year and he has been WAITING for one of his own! 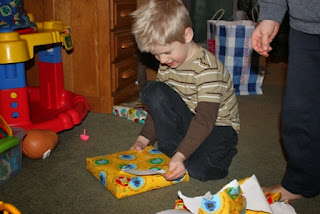 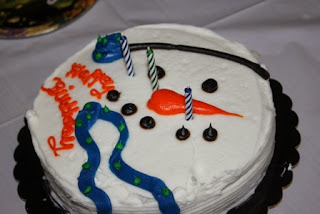 I asked Nate several days prior, what kind of cake he wanted.  He informed me that he wanted a Rocket, or horse or balloons, "You know mom, one of the cakes from the store - those are cool".  So I picked out, what I thought, was an awesome cake.  When he saw it he said, "This is not a cool cake mom, not at all, I need to go to the store with you to pick out a cool cake."  Well, then Papa stepped in, picked him and started talking about what an awesome cake it was with orange and blue worms all over it.  THEN Nate thought it was cool.  :-) 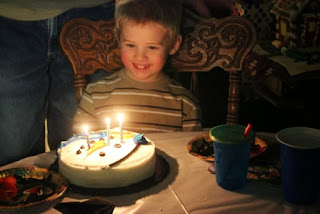 Yes, there are only 3 candles; Yes he is turning 4; I so thought I had more candles and that is all that needs to be said. 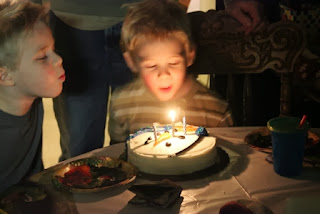 Josh had to get in on helping him blow out candles.

The boys had a lot of fun and were said when the grandparents left BUT were asleep in less then 2 minutes once they went to bed.

On Sunday, we enjoyed a fun day with Nate.  One of the nice things about a weekend birthday is you get the whole day to kind of pick when you do what.  We let Nate decide when to open gifts and eat cake! 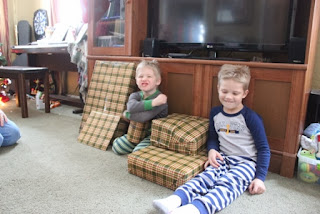 Nate (or maybe Josh) wanted to open his gifts in the morning - I think Nate had a little help from Josh on determining this time.  Josh wanted a picture with the gifts too. 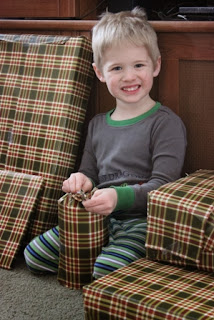 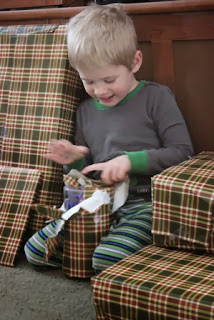 Opening his first gifts - some suction cup building . . things.  He was so excited because he had picked this out of a catalog. 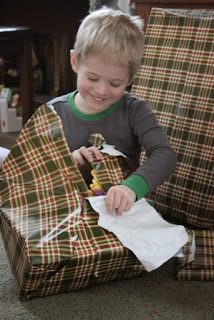 He also got a game called "Cheeky Monkey".  He saw it advertised on TV months and months ago and has been asking for it since.  The game is hilarious because they have to chase the monkey around to put rings on his tail - I might make Papa and Nana play it just for Laughs on Christmas Day HA! 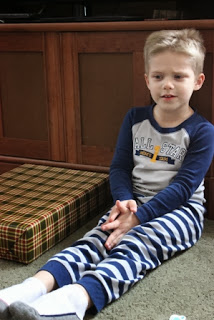 Not to be left out, Josh needed his picture taken again before all of the presents were gone. 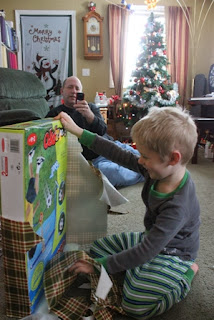 Nate has informed us ever since going to Vacation Bible School at my parents which was a Soccer Theme that he wants to play soccer.  It may not hurt that his favorite person in the world, his cousin Kate, is an awesome soccer player.  SOOOO, we got him a Soccer goal.  He was so excited. 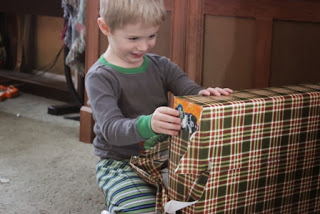 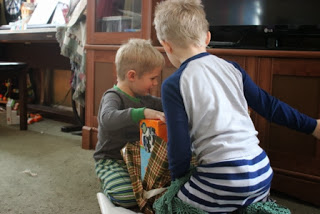 This was another gift he asked for from a catalog - it is a race car set and let me tell you, it is fabulous.  Talk about the perfect gift for this little guy! 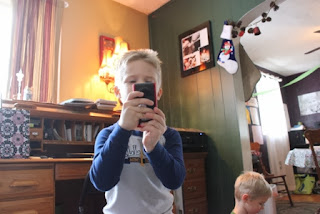 Joshua loves to take pictures and video . . .. I'm very sad because we can't find my little "cheap" camera which is the one he is really allowed to use.  I remember the last time I used it, even uploaded photos from it, and since that day I can't find it.  It is in this house somewhere . .. . 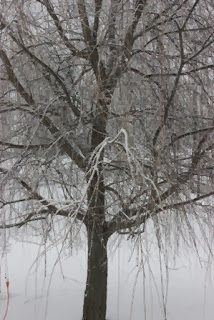 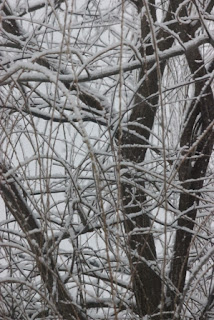 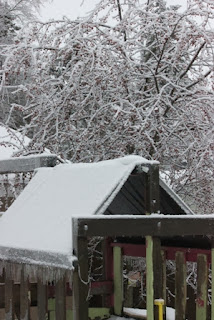 We got hit by a beautiful Ice Storm (good thing we planned on staying in today anyway!).  Figured I would include a few pictures of the storm :-) 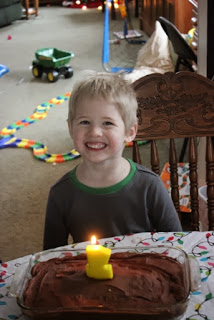 We had lunch - Chicken Nuggets and Fries because Nate loves them and the boys went right back to playing.  About mid-afternoon he was ready for cake.  This time he asked for a cake AND Cupcakes so I baked both yesterday (6 cupcakes and a small cake with left over batter) 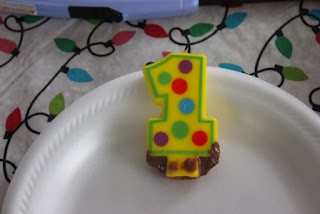 Wait, isn't he turning 4?? Yep!  When we were at the store on Saturday, I let Nate pick out the candles for his cake (since I didn't have any more . .. uuugg!).  He liked the #'s so I showed him the 4 and he said it was not cool, he liked the one because it has polka dots and THAT is cool.  Therefore, his candle is not a "one" but rather it is a polka dot candle and that is according to Nate. 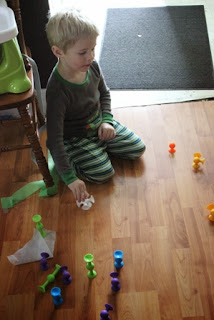 Nate playing with the suction cups - the boys loved sticking them to the floor! 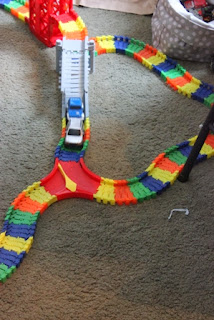 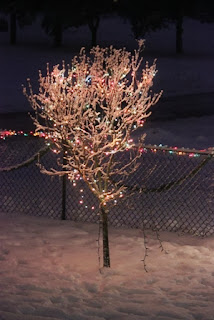 One final ice photo - I love how this tree looks in the dark, with the ice and the Christmas lights.

Besides the gifts above he also got a new book called "The Monstore". 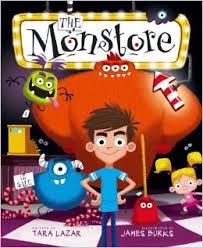 I highly recommend this book - it is cute, fun, and interactive.