About 7 years ago, I set up a family photo wall in my dining room.  I actually did it all one week while my husband was on a missions trip.  It gave me a great excuse to go to Kohl's (like I needed an excuse HA!) and pick out specific frames.  Through the years, this wall has changed and been added to (including those large frames on the left!).  As much as I love the photos  . .. I was really starting to not like the look of it so I started looking for other options.  I fell in love with the Creative Memory Memory Boards and started to run with that idea when, guess what?  Those boards when on sale . .. they were 50% off!  So I snapped up 4 of them and then finally had a chance to hang them up! 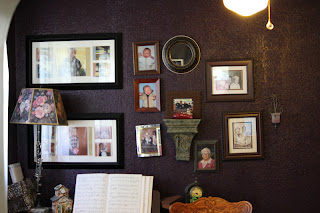 This is the before wall . . .well, I had already started to take photos down.  I tend to do that - start a project and THEN remember to take a photo! 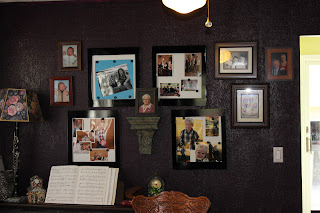 This is the final product!  I love the arrangement of the four frames with the "extra" photos around them.  It's amazing how much more we now notice these photos.  Even the boys have noticed them and point out who is in each photo (Nate will point to Memory Frame on the top right and say "Look mom it's my boys" - he calls all of his cousins "my boys" HA!) The other nice thing about the boards is that they are easily changeable since the pictures are held up with magnets.  As much as I love the 8x10's of the boys at their birthdays, I would like to be able to change out the 4x6 photos through the year to see how they have changed :-)

Each of my boys also have a similar board in their rooms and they LOVE when I change out the photos (which I try to do every few months).  Photos add so much to a home - and they make people feel good :-)