I recently posted about my niece's Bridal Shower, sharing lots of photos of all of the decor and some of the games.  Being unusually crafty, I made most of the items for the shower so, over the next few weeks, I'm going to share everything :-) 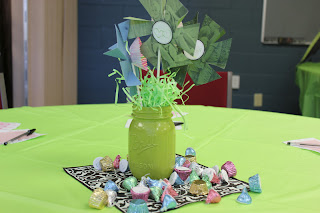 Several weeks ago, I shared two ideas in a Too Cute Not to Toot post which inspired this idea.  Those two ideas looked like this: 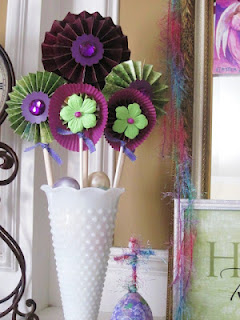 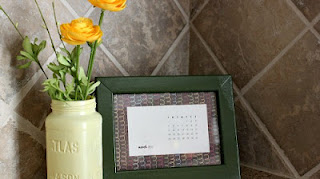 Obviously, the Mason Jar is pretty self explanatory as far as an idea.  The flowers are great, aren't they?  Notice that mind look nothing like that?  There is a reason for that.  Homespun with Love gave a really good tutorial that I followed to the letter but . . .for the life of me, I could not get the flowers to work.  I was pretty much at my wits end and was ready to go buy flowers to stick in my freshly painted vases when I came up with an idea.

I then had a brainstorm and went on search for pinwheel flowers and found the perfect craft over at Alphamom. 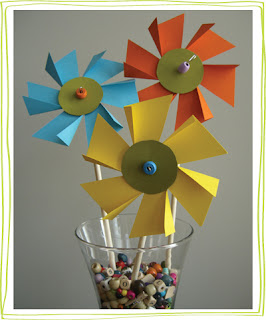 Now THIS I could do but I wanted it to be more grown-up which is when I got the idea to print off black and white photos onto colored card stock.  (Thankfully my niece had posted her engagement photos on facebook!) 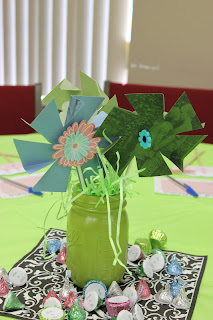 I really thought I took photos of the process but . . .apparently I just  thought I did but I will try to explain it anyway.

1) I spray painted the mason jars avocado green - it ended up being much more lime green then I thought it would which was a GOOD thing!!
2) Print out photos on card stock colors of your choice. Tip:  Use double sided paper since both sides of the paper will be seen.  I only copied the photo on one side thought.
3) Using the template provided from Alphamom (link above), cut out the pinwheels. Tip: When I folded the edges, I went every other direction so they folded both to the front and back since, again, both sides would be seen.
4) Hot Glue a stick to one side of the pinwheel.  (I used lollipop sticks).
5) Create a "center" to the flower on both sides.  I used mini-cupcake liners, buttons, flower cut outs, and some sparkly dots.  Hot glue them on (this also covers the stick)
6) Once the glue is dry, stuff the jars with shredded paper and stick the "flowers" into the jars.  (the paper will keep the flowers in place)

This project is pretty simple and is very inexpensive especially if you have mason jars and scrapbooking paper at home :-) 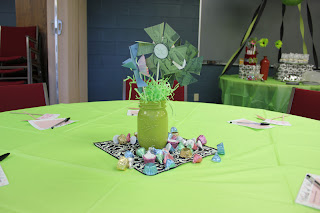