Several weeks ago I did a Make It Monday   post showing several Fourth of July ideas that I hope to make. I really had great intentions but, only one of the items happened: 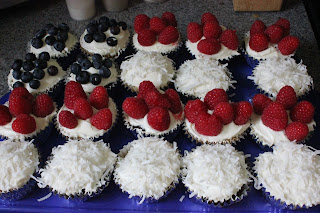 These were so easy to make!  I went the total "cheater" way.  I used a box cake mix and canned frosting.  Once frosted, I just added the toppings.  Blueberries and Raspberries and then dipped in coconut to add texture to the white "stripes".

Funny story.  I had made two batches - one to take to the family party on Fourth of July and one to take to our church picnic the following day.  I put the family batch in my cupcake holder.  Darryl grabbed the handle, walked outside and the bottom fell out.  Cupcakes everywhere covered in dirt and ants. Oops!  We threw the whole thing (cupcake holder included - since this had happened before) - right into the garbage!  I frosted the second batch quickly and took them those to the family party.  The church picnic was "stuck" with marinaded cucumbers and a bag of Doritos HA!