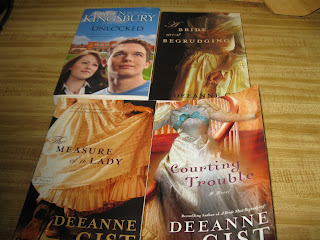 1. Unlocked by Karen Kingsbury - Before You Take a Stand ... You Got to Take a Chance. Holden Harris is an eighteen-year-old locked in a prison of autism. Despite his quiet ways and quirky behaviors, Holden is very happy and socially normal---on the inside, in a private world all his own. In reality, he is bullied at school by kids who only see that he is very different. Ella Reynolds is part of the 'in' crowd. A cheerleader and star of the high school drama production, her life seems perfect. When she catches Holden listening to her rehearse for the school play, she is drawn to him ... the way he is drawn to the music. Then, Ella makes a dramatic discovery---she and Holden were best friends as children. Frustrated by the way Holden is bullied, and horrified at the indifference of her peers, Ella decides to take a stand against the most privileged and popular kids at school. Including her boyfriend, Jake. Ella believes miracles can happen in the unlikeliest places, and that just maybe an entire community might celebrate from the sidelines. But will Holden's praying mother and the efforts of Ella and a cast of theater kids be enough to unlock the prison that contains Holden? This time, friendship, faith, and the power of a song must be strong enough to open the doors to the miracle Holden needs
My Opinion:  If you like Karen Kingsbury, you will enjoy her writing.  This story was heavier than most of the books she writes and one story line, I felt, could have taken a different turn.  It does give great insight into the world of Autism yet is too short of a story to really get into depth on the many story lines going in within the entire book.  Would I recommend this book?  Absolutely!

2. A Bride Most Begrudging by Deeanne Gist - When Lady Constance Morrow finds herself held against her will aboard a ship bound for the American colonies—a ship filled with "tobacco brides" and felons—she is quite sure that as soon as she arrives she will find a reasonable man who will believe her father is an earl and send her back on the next ship to England. Instead she meets Drew O’Connor, a determined Colonial farmer who is nearly as headstrong as she is. Drew wins Constance as his bride but soon realizes he has taken on much more than he bargained for.
My Opinion:  This is my 2nd read through this book and I really enjoyed it.  It is a pretty easy read but yet is a nice story.  It is a sad reminder of how life was for the early settlers here in the America's yet has a light hearted humor written in it as well.  Would I recommend this book? Absolutely - it's a "cute" read.

3. The Measure of a Lady by Deeanne Gist - Gist follows her popular A Bride Most Begrudging (2005) with a -damsel-in-distress tale set in 1849 San Francisco, where Rachel Van Buren is marooned when her gold-crazed father dies. Rachel must also care for her two young siblings. She finds a city filled with mud and sin, and there is no other decent woman, or "sunbonnet," in residence. She'll have to adjust her straitlaced outlook or die, and adjust she does in this amusing, often almost titillating tale brimming with period detail.
My Opinion:  Again, this is a second read of this book and I enjoyed it again.  It follows Gist's writing where it has a great story, with reminders of how difficult life was like in the time period it was written (during the Gold Rush), has a good lesson embedded in it, and has a fun love story involved.  Would I recommend it?  Absolutely - again, it is a cute read.

4. Courting Trouble by Deanne Gist - a 30-year-old single woman who draws up a list of the eligible bachelors in 1890's Texas
My Opinion : This was another 2nd read and I enjoyed it.  It has a little stronger story line about how this 30 year old single woman gets taken advantage of and than how she figures out what she really needs is just Jesus Christ as her Husband and also learns to forgive herself for what is considered unforgivable.  It still as the same humor and lightheartness throughout but also is a little bit of stronger read than the others I've read by Deanne Gist.

Just to note - the three by Deanne Gist are not related to each other - they are all stand alone books.  As I was looking up the descriptions on these though, I did find that there are many more I don't have!  I may have to check out half.com and pick up a few more :-)

As you can see, I'm reading for fun, alot.  I am in the middle of one of my goal books and really need to find time to concentrate on that one so I can get it finished up :- )

Keep reading!
Posted by Jackie Koll at 3:20 PM No comments: