This is the first year that the boys have picked out their own Costumes and, yes, I will admit that I think picking out costumes is fun for me too.  I find Halloween to be a fun holiday - my kids will ask me "What is Halloween for?" and I will always reply, "Free Candy!" .   I would like to decorate my hard a little bit but I think I need to play a little earlier for that :-/

Anyway, Nate told me he wanted to be a dragon and Josh said a ghost.  We went to Party City and looked at what they had.  Josh quickly changed his mind and wanted to be a Pirate (which I was glad because I didn't want to have to make a ghost costume HA).  We tried on the one dragon costume but it did not fit Nate at all.  Nate picked out another pirate costume but was a little disappointed.  The next day I went onto the website and found a dragon costume and, so I could be mother of the year, ordered it.  When it came, Nate was so excited, tried it on and seemed to like it but then . . .looked at me and said, "I really don't like this, I want to be a Pirate". Seriously?  Oh well! 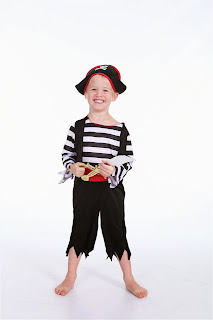 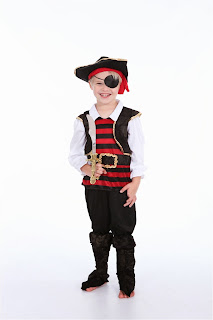