Our week was again, a little discombobulated due to having extra kids here but we still managed to get a few things done. 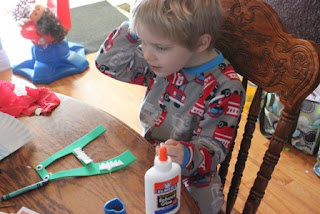 We finished up learning about the Letter "A" by making our letter craft thanks to Totally Tots. 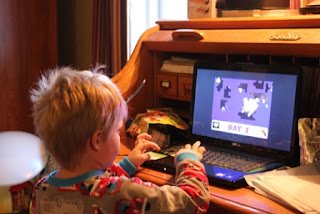 Josh took a real interest in a computer game that I actually picked up over a year ago for him.  It's a Charlie Church Mouse (aka as Chuck-E-Cheese according to my kids).  Josh managed to figure out every single game and yes, he played for about 3-4 hours.  (don't judge).  I have installed the game on our old computer so he doesn't have to play on mine anymore and we have a timer set up - 20 minutes is what we are working on for now.  Enough time to play a few games but not enough to get brain fried! 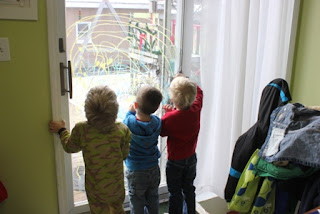 Window crayons made a reappearance at our house this week.  Any window that the boys could reach were covered .. as was their hair, clothes, hands (their fingernails - nasty!).  THEN they had fun cleaning the big slider - for real. 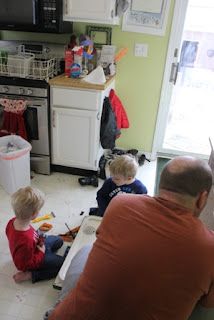 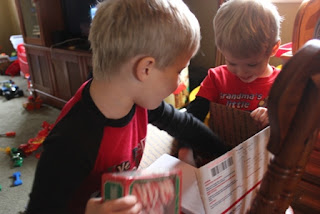 On Friday, we did not have extra kids so we actually did a full lesson and started Letter "B".  At the end of our lesson, they got to open a box that Nana had sent them in the mail.  It was cute because I showed them the box and told them that Papa and Nana sent it . . Nate said, "But where is Papa, why is he hiding?"   Isn't that cute? I explained that they mailed it because they missed them.  They enjoyed their treats :-)

I had hoped to get through a little more than I did this week but that is one of the joys of homeschooling - we are able to go with the flow!  Next week we are planning to get through the entire lesson on Letter B and do some fun winter related things as well since winter is actually here!