What We Are Eating - Enchiladas 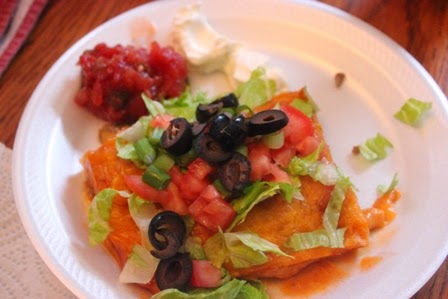 Since Darryl and I got married, we've attempted to make enchiladas.  We did the "cheater" version where we just rolled up tacos and threw some canned sauce on top; I've tried all kinds of recipes and then, I gave up.  I then came across this recipe from Pioneer Woman and I feel like I have a winner!  It has great flavor and has the right amount of sauce.  This is on the monthly meal rotation which tells you something - we like it enough to eat it every month! I do use flour tortilla verses corn tortillas and it works out fine.  I think that is totally a flavor choice . . .I'm not a huge fan of corn tortillas!

Step #1 – The Sauce
In a large saucepan over medium heat, add oil and flour and whisk together to make a paste, cooking for one minute. Pour in the red sauce, chicken broth, cilantro, salt and pepper. Bring to a boil. Reduce heat and simmer 30-45 minutes.
Step #2 – The Meat
Brown the meat with onions in a skillet. Drain off fat. Stir in 2 cans diced green chilies and seasoned salt. Set aside.
Step #3 – Tortillas
Heat canola oil in a small skillet over medium heat. One by one, using tongs, fry tortillas in oil until soft, not crisp – about 30 seconds per side. Remove to a paper—towel lined plate. Repeat until all tortillas have been fried.
Step #4 – Assembly
Preheat oven to 350 degrees. Pour ½ cup red sauce in bottom of baking pan. Spread to even out. Dip each tortilla into red sauce, then remove to work surface. Spoon meat, a little grated cheese, a little black olives, and green onions in the center of tortilla. Roll up and place, seam down, in baking pan. Repeat until pan is filled. Pour extra red sauce over enchiladas. Top with remaining cheddar cheese.
Bake for 20 minutes or until bubbly. Sprinkle cilantro over enchiladas before serving.