Some Simple Fall Decorations to make

I've been trying to figure out recently why I don't get nearly the same amount of things done that I used to get done.  I finally figured  it out.  My kids don't take naps.  There was a fairly short period of time where both boys went down for a two hour nap (at LEAST that long) at the exact same time which meant I had two hours to work on crafts, scrapbook, work in the yard or, well, just sit outside and read (and get a tan!).  Now that just doesn't happen.  They boys are almost to a stage now where I can work on crafts and they don't try to take over . .. almost but not quite.  :-)

So, for this first installment of "Make it Monday" I thought I would share two very simple Fall Crafts I made several years ago.  They are still two of my favorite decorations to put out at this time of they year so even though they are simple, I still love them! 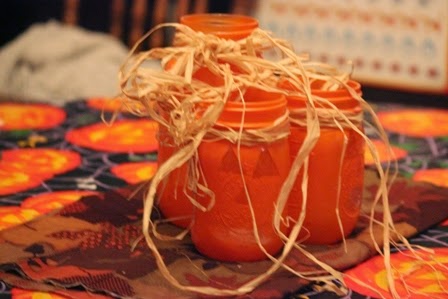 The mason jar Jack-o-Lantern's are so adorable and so easy to make!  All you need is a few canning jars of varying sizes, some spray paint, Ribbon or Raffia, and Glad "Stick and Seal".

Very simply, cut out the shapes you need from the press and seal and stick them onto the mason jars.  Use spray paint to paint the entire outside of the jar.  Once dry, remove the press and seal pieces.  Tie ribbon or raffia around the neck of the jar.  Feel free to add tealights or electric candles inside the jar for added effect. 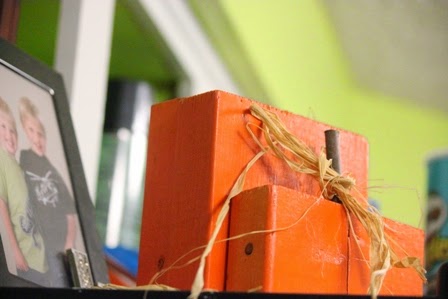 The wood block pumpkins are beyond easy.  Just cut some 2x4 (or any wood in the scrap pile that is thick enough to stand up on its own).  Spray paint the wood orange, cut off some small tree limbs and hot glue to the top of the wood and add some raffia for something extra.  Super cute and so very easy!