I love winter.  No, I don't ski or snowboard or even really play out in the snow that much but I still love the crisp, clean look of the world after a snow.  What I love even more is a snow storm especially when we are all at home like we were this past weekend.  The midwest has gotten hit hard with snow and cold.  We had an great snow storm this past weekend and now are dealing with friged temperatures like -30 below wind chill.  We put a thermostat in our basement to make sure our pipes don't freeze . . .the basement is at 41 degrees right now.  No wonder the floors in the house are cold!  Any way, here are a few photos from our weekend. 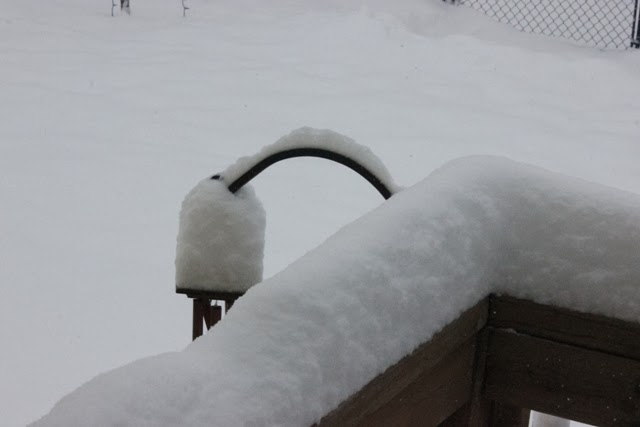 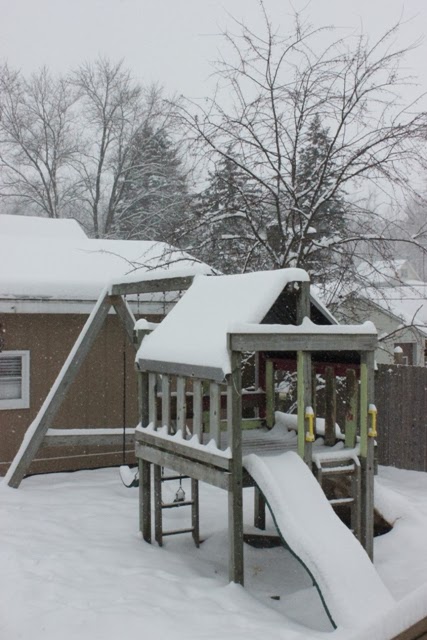 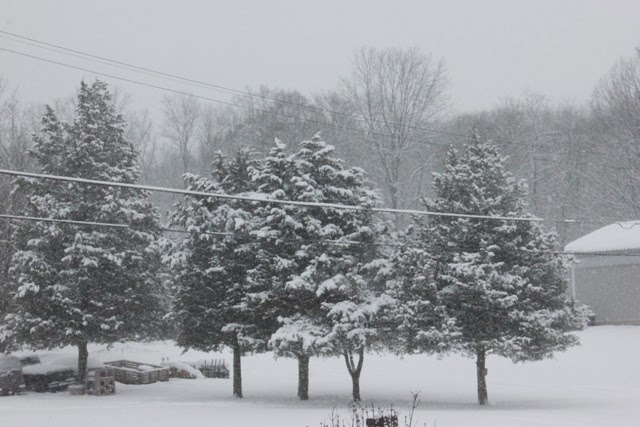 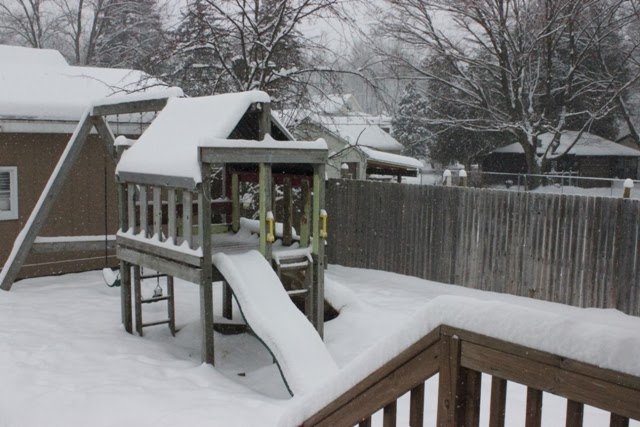 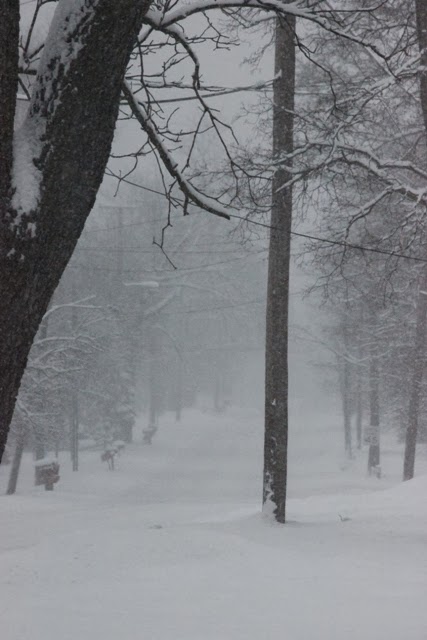 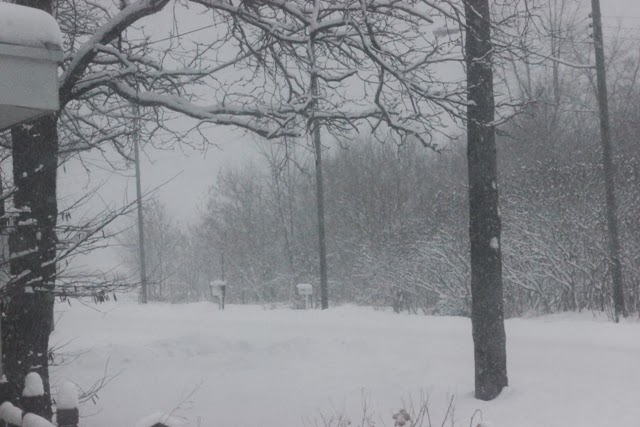 In total we ended up with about 12-15 inches of snow.  There was a lot of blowing so it was hard to get a really accurate total but based on what I saw build up on the rails of the deck two different times that is a close estimate. 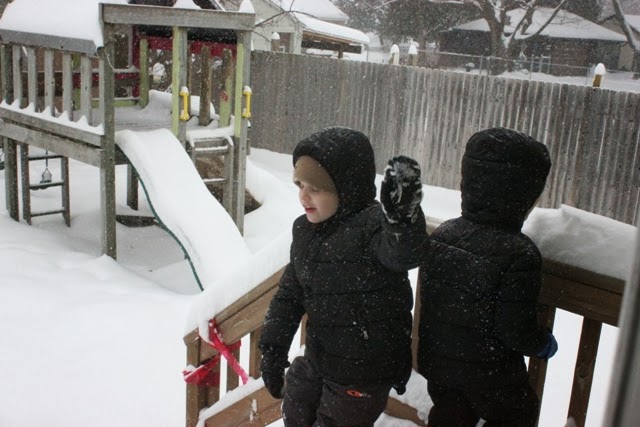 Sunday was the only day that it was even remotely warm enough for the boys to go outside.  Last week we dealt with ice cold temps (below zero wind chills) and the temps dropped on Sunday throughout the day until we hit those arctic cold temps once again (and are supposed to stay there all week!) 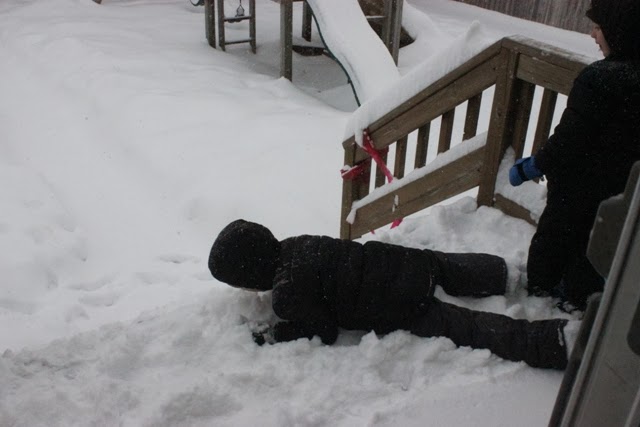 Josh asked me to take his photo laying down on the porch licking the snow . . . 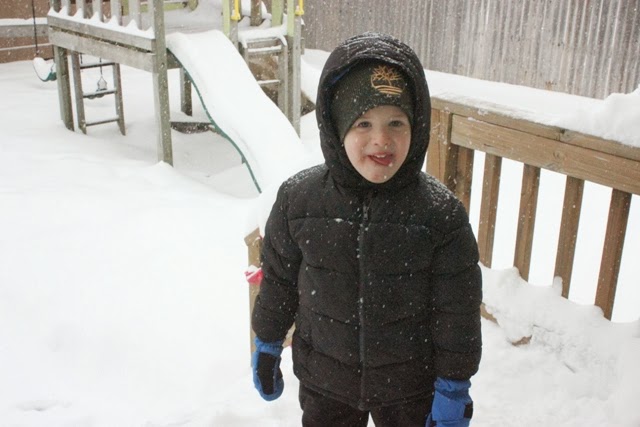 While Nate just licked  the snow off the porch railing. 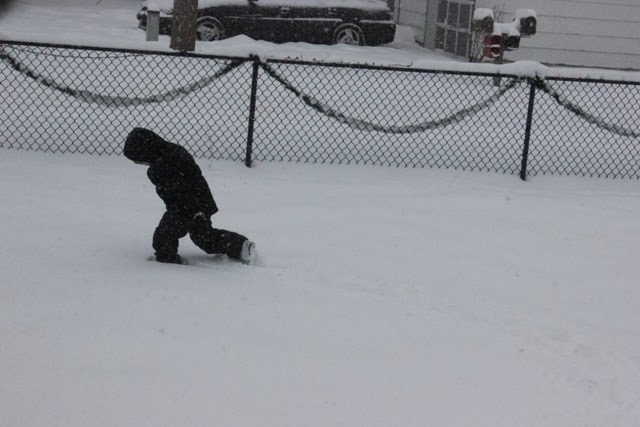 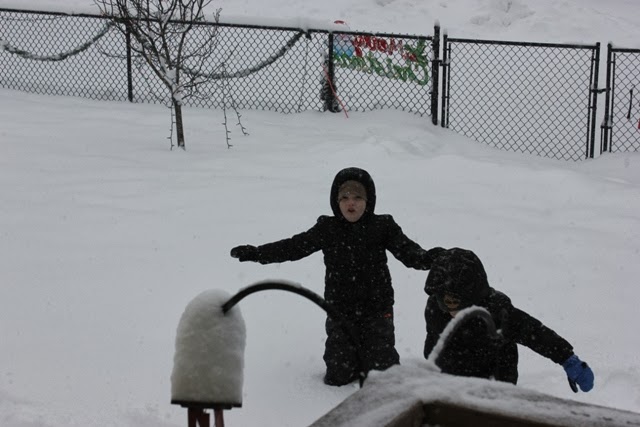 This photo is of the boys and they are falling into the snow to make snow angels. 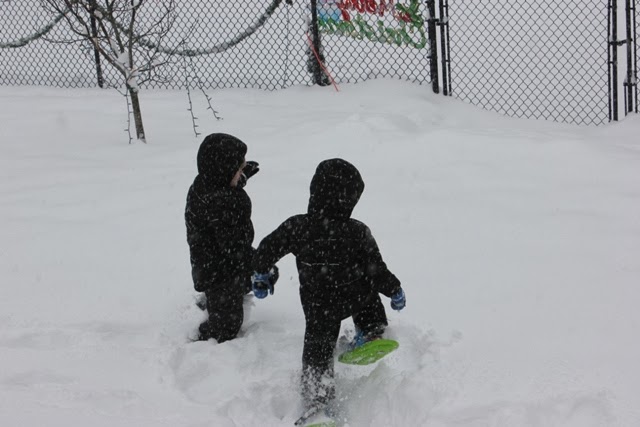 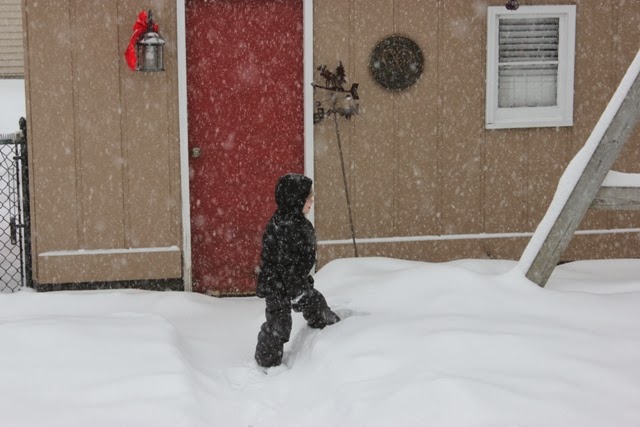 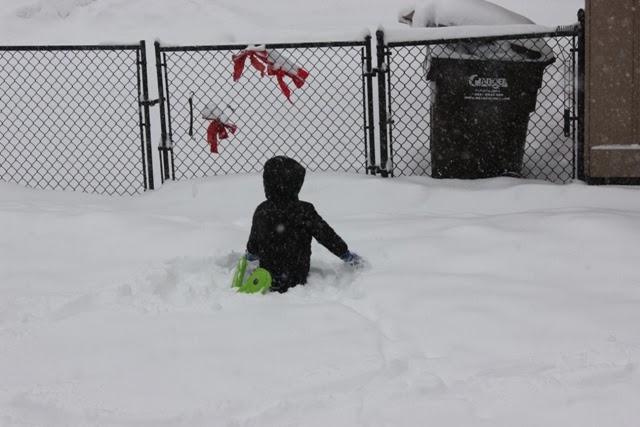 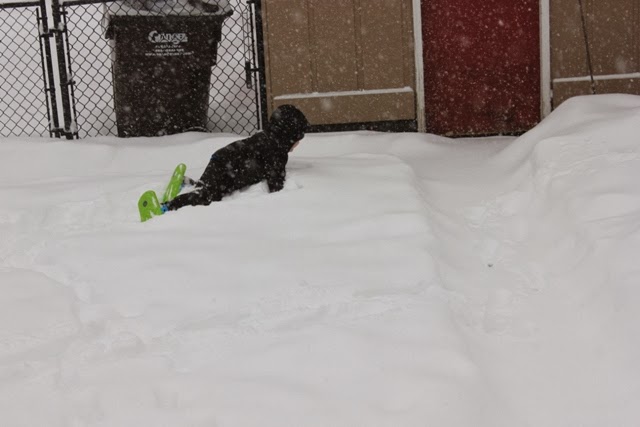 It was so deep (or as Josh said, "It is as deep as people!" that Nate crawled through the snow despite wearing his dinosaur Snow Shoes. 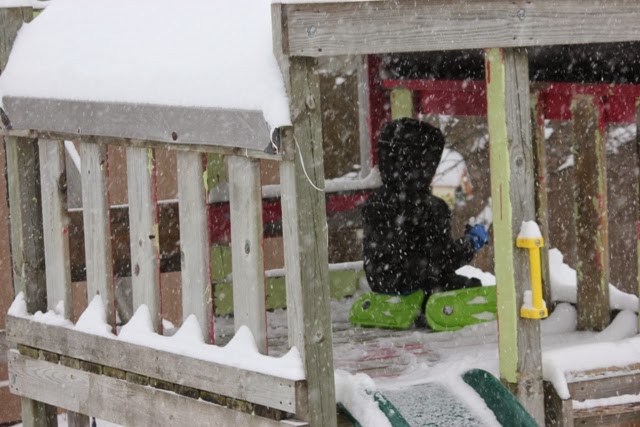 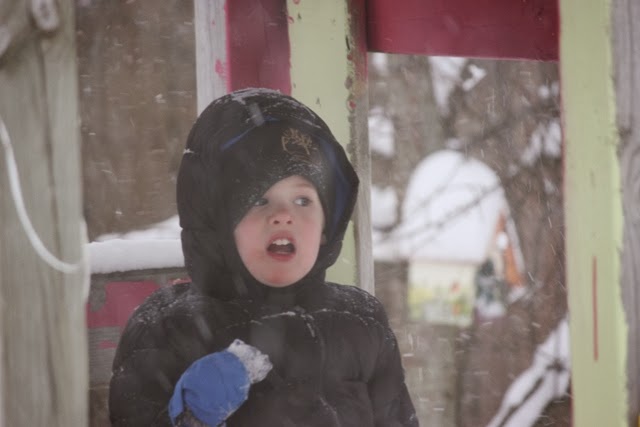 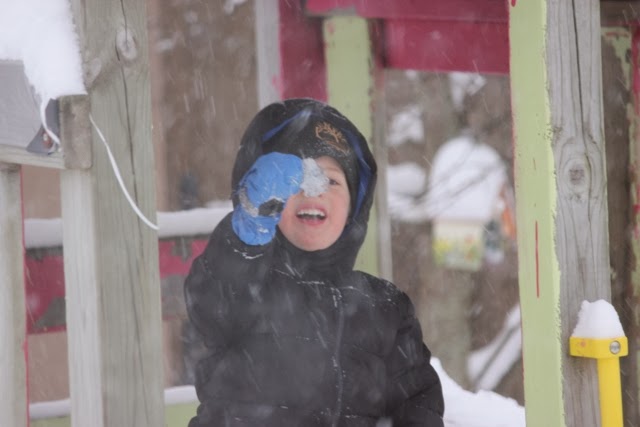 Nate managed to get himself up into the treehouse which he loved.  He sat up there and ate ice to his hearts content.  Eventually he slid down the slide into the snow :-) 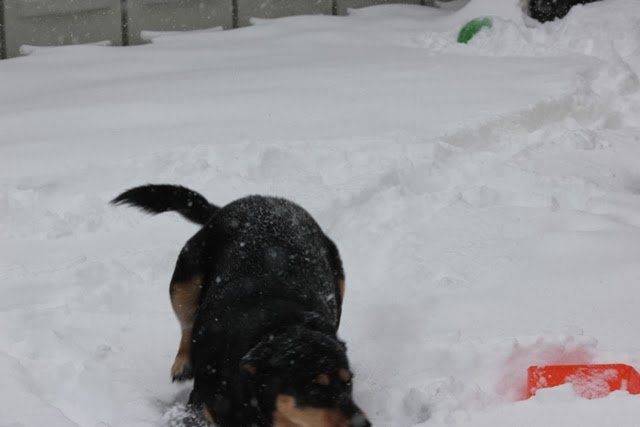 Even China had fun in the snow. 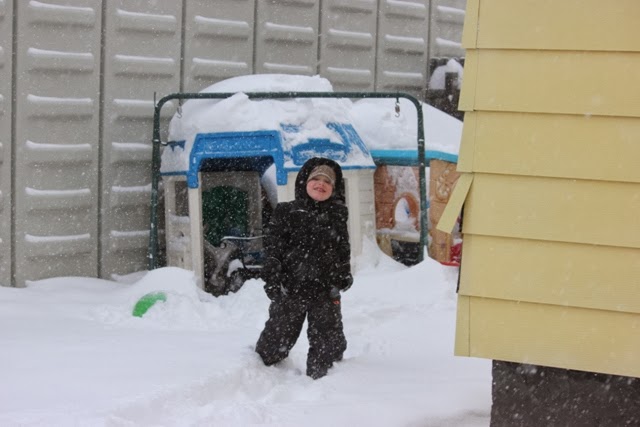 Josh was busy digging out snow but stopped to give me a photo! 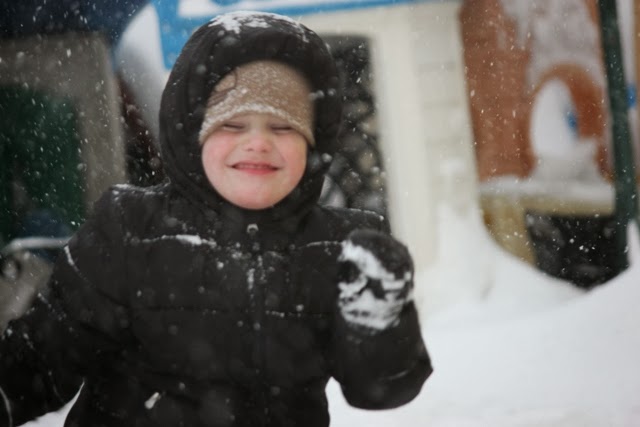 Or two!  He LOVES to be outside in the snow and one of these days we have to build a snowman because he is WAITING to do so! 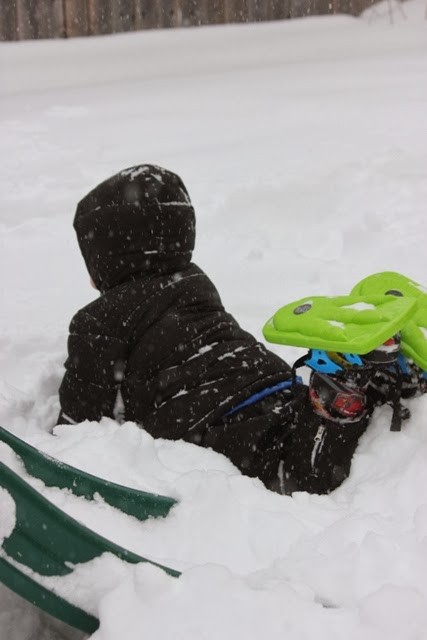 After coming down the slide . .. Nate was "stuck" in the snow. 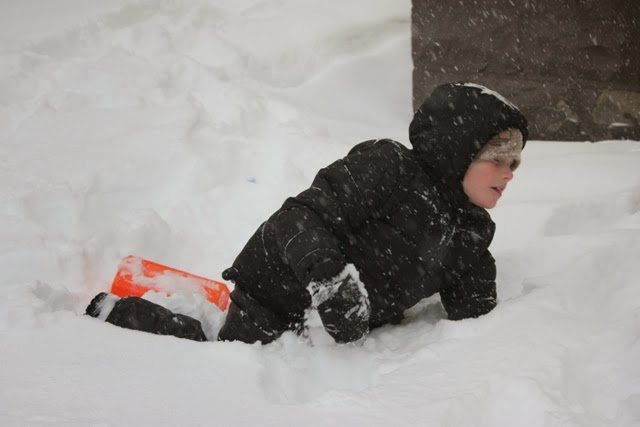 Josh loved falling into the snow :-)

That is what is keeping us busy so far this week.  :-)