Fun at the Fair

We live in an area that hosts "The Largest Free Fair" but we very seldom make it to the fair on a yearly basis despite the fact that it is literally in our back yard.  Last year it was so blasted hot the week of fair that we didn't leave home; the year before we had planned to go but it closed early due to a late season flood.  Well, after the awful heat this past week, we were blessed with a beautiful day and made a trip to the fair.  The boys were so excited and couldn't wait to ride rides! 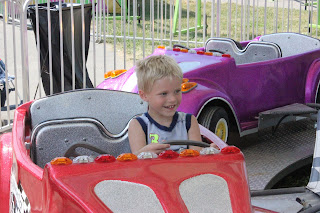 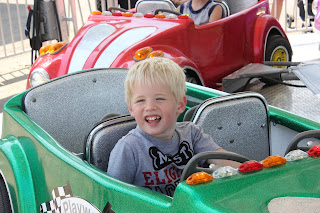 When we rounded the corner to where the young kid rides were, Nate's eyes got huge and he started jumping up and down - ready to ride.  We quickly bought some tickets and the boys both raced to ride the cars.  Their smiles tell it all - they loved it.  (Especially honking the horns on every single ride over and over and over again!) 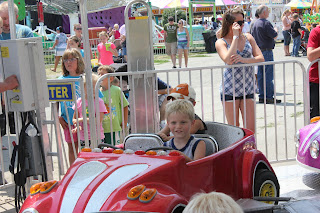 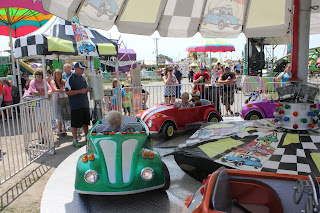 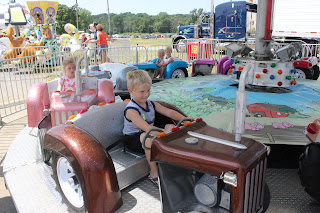 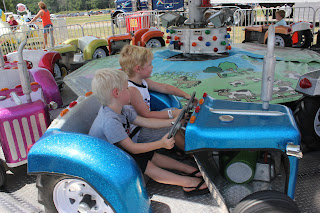 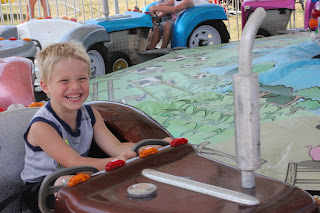 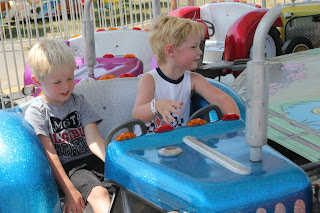 It was the funniest thing ever.  When we moved on to the tractor ride, Darryl told the boys to pick the fastest tractor.  Well, Nate wanted the blue one so even though there were empty tractors and the blue one already had someone in it, he climbed right in HA!  He then proceeded to try and engage his riding partner in a full conversation but that kid wanted nothing to do with it. 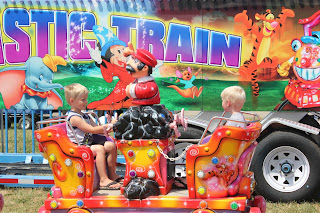 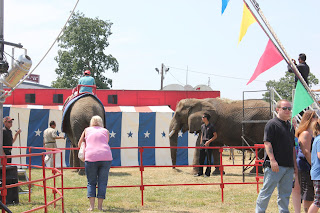 Every zoo we have visited in the past year has NOT had any elephants yet, here at this fair with the little circus they had elephants.  When we got home I asked him if he loved seeing the elephants and do you know what he told me?  "Mom, I loved the camels best." Totally surprised me :-) 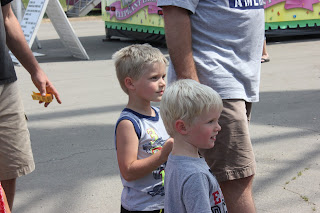 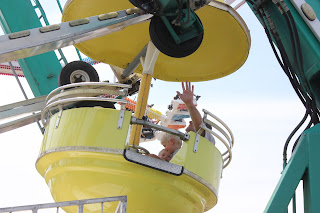 When we told the boys we were going to the fair Nate instantly asked to ride the ferris wheel so when he saw it in person, his eyes lit up and he couldn't stop looking up.  Once Josh saw that the ferris wheel didn't go very fast, he was on board with riding it too.  I chose to stay on the ground just to save a little money on tickets but also to take photos.  Darryl said that if he hadn't been keeping Nate in his seat, Nate would have been standing up leaning over the side of the cart to get the full experience.  That kid has very little fear. 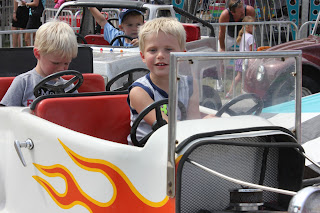 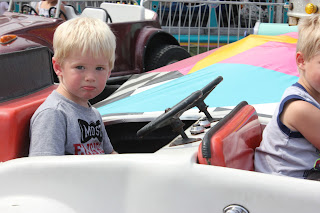 We let the boys pick one last ride before we left and they wanted to ride in the race cars.  Nate told me that he wanted to ride in the same car with Josh so when it was time to load up he jumped in right behind his brother.  Just as the ride was starting he called out to me and said, "Mom, I don't want to ride in here, I want my own".  It was too late and he was so sad.  The photo of his pouty lip just breaks my heart because he had so much fun up until this moment . . .

Yes, we did enjoy some fair food - we did not plan to buy much, if any, but Josh asked specifically if they sold lemonade anywhere so we bought some fresh squeezed lemonade, Fresh, hot Fries and some snow cones.  What?  It was HOT on the midway.  When we left, we were all so hot that we took a little drive in the A/C to cool off.

We are already looking forward to next year's fair and plan to pick up wrist bands early while they are sale so the boys can ride all the rides they want :-)
Posted by Jackie Koll at 7:00 AM No comments: