Yes we did - we went camping last weekend and had a blast!  Here's our trip in a nutshell :-)

Friday
Food: Bernie O's Pizza and Popcorn!
Fun: Arrival and the Drive-in
The Plan: We planned to leave home around 1:00, which we did, but we had several stops to make to so we didn't arrive to the campground until 3:45.
Tidbits:
1) When I started putting things in our cooler I discovered that our small "drink" cooler had bit the dust.  We stopped on the way out and bought a new cooler with a gift card we got from the dentist last week.
2)  While waiting in line to check in, we had a "show" The ice truck was delivery . .. ice . . .and the poor delivery guy lost an entire pallet of ice off the back of his truck.  Yes, I giggled.
3) It took Darryl three trips to the office to get into our cabin.  First, they did not give us the code; Second the code did not work; Third, they gave him a key.
4) Nate fell out of bed.  I expected this to happen, though, so I had actually built a pallet on the floor just below his bed so when he did fall out, he landed on lots of blankets and I just covered him back up :-)
The Story:
Once we got our key, we unloaded and set up camp.  By the time we finished, we were tired so, instead of roasting hot dogs, we switched plans and headed to Bernie O's for pizza (Our favorite place, ever!)  It was a nice break and allowed us to refresh and cool off before heading back to our site.  After getting the boys in their PJ's, we loaded up in the truck and headed to the Drive-in to see Ice Age 4.  This was the boys first time at the Drive-in and they loved it.  They managed to stay up through half the movie and literally went from wide-eyed, to out cold in 3 seconds flat.  They were so out of it that they never woke up when we moved them into their car seats nor when we moved them into their beds.
Something Special: 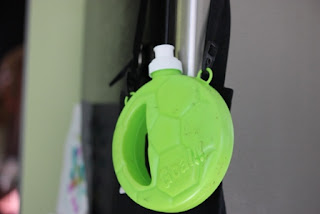 The week before we left, I found these two cute canteens at Wal-Mart.  This is Nates (Josh's was in the fridge!) They were the special "treat" when we went to the movies.
Photos: 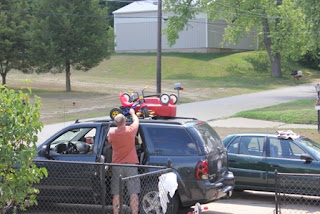 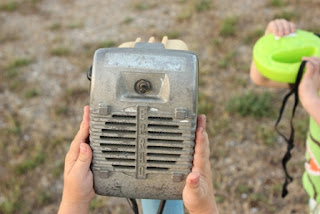 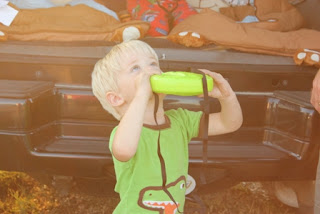 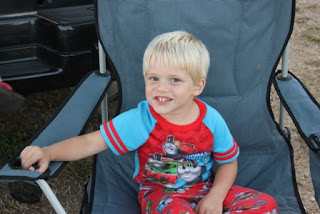 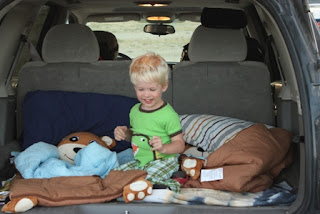 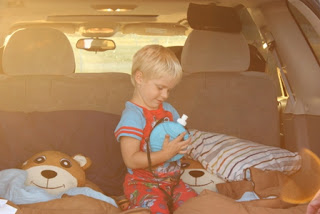 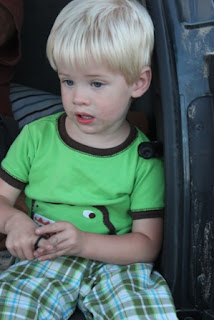 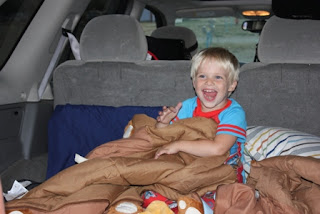 Saturday
Food:
Breakfast:  Bacon and Eggs (cooked in the electric skillet), Donuts, and Chocolate Milk
Lunch: Left Over Pizza, Chips, and Grapes (we had planned to go to BernieO's for lunch so the left over pizza was perfect!)
Dinner: The boys had Hot Dogs while Darryl cooked Marinated Sirloin Steak Kabobs over the open fire and we had fried zucchini too (Electric Skillet - my best camping tool!)
Fun: The beach and going to Ruth Anne's for Ice Cream!
The Plan: Hang out at the campground in the morning; go to the beach in the afternoon; enjoy an treat of ice cream before dinner.
Tidbits:
1) The boys loved running up and down the little leaf covered hill on our camp site; they also loved pushing each out in the wagon up the hill and then letting it go to see where it landed
2) We couldn't have asked for better weather - it even got cloudy when we went to the beach which made it so much more fun to play.
3) The boys took their first real "showers" (instead of baths) at the campground.  They almost liked them.
4) The Collection of Acorns began.
5) You know your kids are tired when they ask to go to bed :-)
6) The boys enjoyed their first camp fire - and were slightly impressed but more afraid of it.
7) Sleeping - oh boy.  The boys went to bed well but Josh woke up in the middle of the night and ended up in bed with me in the twin bed.  I didn't sleep much that night (We actually put a mattress on the floor for Nate - but both boys slept on it . . well, until I ended up with a three year old electric blanket with me ;-) )
The Story:
What an awesome day.  We played at the campsite, went to the store to pick up a few odds and ends, played on the beach, enjoyed dinner, walked to the ice cream shop, and then Darryl and I enjoyed the campfire after the boys headed to bed.  It was a fabulous day.
Something Special: 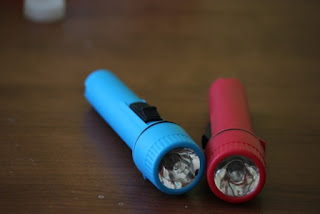 Yes.  Flashlights.  I picked up new flashlights at Wal-Mart for a dollar each.  We gave these to the boys and watched them shine lights on the ceiling of the cabin on Saturday evening.  They played for a good hour and then were sound asleep.
Photos: 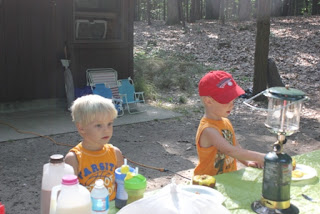 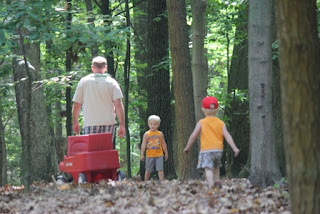 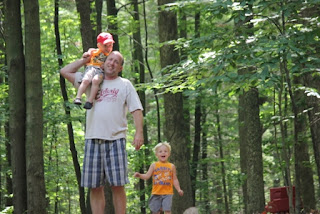 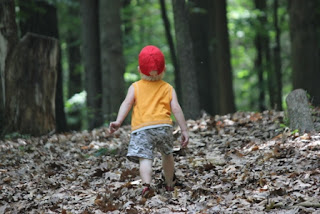 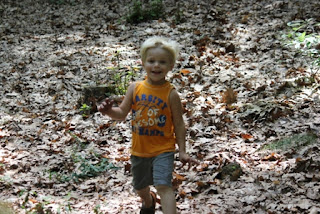 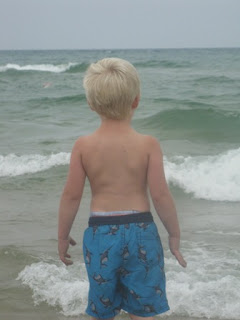 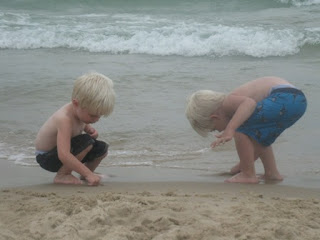 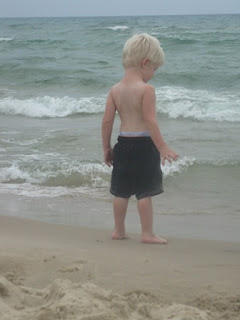 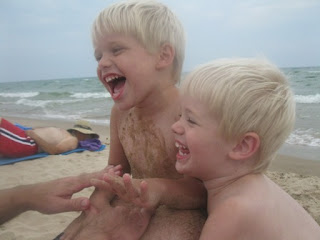 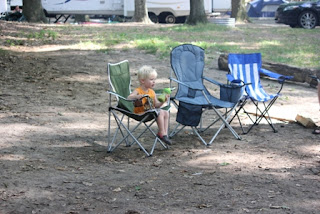 Sunday
Food:
Breakfast: Cereal and Pastries (we picked up at the store on Saturday so they were fresh)
Lunch: Culvers - on the way home
Fun: A scavenger hunt and Packing up (if you consider that fun)
The Plan: Just get up and have breakfast before slowly packing up.
Tidbits:
1) Both boys told us that they loved camping and did not want to go home (but they both loaded themselves in the truck as soon as the doors were open and we started packing!)
2) The boys ditched the scavenger hunt and just went on a search for acorns.
The Story:
After not really sleeping, I got up at about 7:00 and left to use the restroom, unintentionally locking myself out of the cabin.  I enjoyed a very quiet hour sitting outside . . I actually took a snooze in the camping chairs.  We enjoyed playing for a bit before starting to pack up.  It was HOT on Sunday morning.  We finished up and hit the road at about noon and took the back way home with a stop for lunch at Culvers at about 1:00 (It tasted soooo good!!).  Once home, we unloaded and crashed - wow was it hot.  (Did I say that already)
Something Special:
We had planned to help the boys on this Scavenger Hunt from The Creative Homemaker. 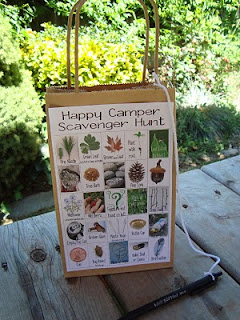 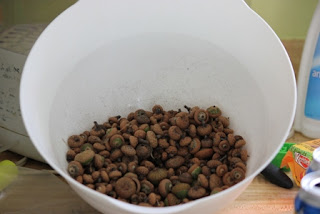 Yep.  Gathered acorns.  I'm sure there are some squirrels who will starve this winter or have to move else where due to my boys gathering up all of their winter supply :-)
Photos:
I know you'll find this hard to believe but I did not take any photos on this last day.  In all honestly, I wish I could have gotten MORE photos and better photos.  There is a lot to keep track of though, when you camp with two very busy boys.

Did we love camping? YES!  Darryl and I used to camp alot before kids.  We have a great tent and really enjoyed just being away, sitting by a campfire and exploring the little towns we would drive through as we took road trips.  We took Josh camping when he was still a baby but once we had two kids, we took a break.  First because trying to take a toddler and a baby camping was more than we wanted to do and Second, because two toddlers and a campfire was not on our list of things to accomplish HA  This year, though, we knew the boys were old enough to understand some boundaries when it came to the campsite and the fire so we scheduled just one weekend to try it out.  Next year, we are planning to go at least twice, if not three times.  We plan to rent the little cabin BUT ultimately, we are hoping to find a pop-up or trailer for an amazing price (by amazing, I mean the kind of deal you talk about for years!!)  Personally I'd like a camper so I can leave it set up all summer - so much less work - but a pop-up would work too!  (But it MUST have Air!!) We figured that once this camping season is done, we can keep our eyes open and we might find something we just didn't expect :-)  And who knows, I have a little idea in the back of my head to steal the family away for a weekend in September when the campgrounds aren't busy just for one more camping trip this year!