I wanted to follow up on Josh's Surgery! On Wednesday, January 18th, Josh was scheduled for surgery to clip his tongue.  My husband and I got up at 5:00 to get ready and then woke Josh up just before 6:00 to get dressed and head out.  On a side note, it isn't very often that we get to peek in on him when he is sleeping and he was so darn cute - then he heard my husband's voice (whom Josh hadn't seen since Wednesday the 11th) and he sat straight up in bed and said "Daddy's Home - Play train circle Daddy?" HA!  Surprisingly, my little non-morning boy was very happy and ready to get dressed and head out.  My mom had graciously stayed the night so she could take care of Nate and the munchkin while we were gone.  We arrived at the hospital right on time and checked in at 7:00.  Then we were called right back to the pre-op room where we waited . .. and waited. . .. and waited. . .and waited.  Seriously.  I have no idea why we had to be there an hour and half early since there wasn't even a nurse in the area until 8:00. 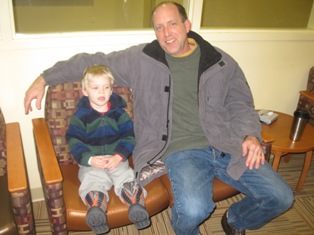 Darryl and Josh right after we were brought back to the Pre-Op room.  Josh was more then a little tired after getting up so early and talking the whole way to the hospital. 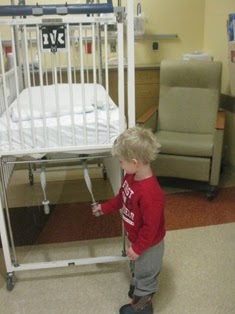 This is Josh's bed - he didn't have to get in it until just as they took him away; don't you love the bed hair?? HA!   He didn't even have to change clothes :-) 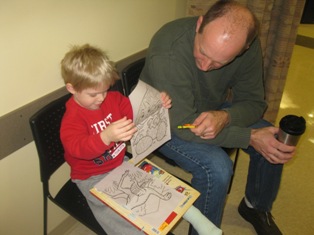 I had thought about taking some toys but wasn't sure about hauling stuff in with us.  Some one from Children's Welfare actually brings stuff to each of the kids - stuff to color, a book, and a toy to use while they are there. 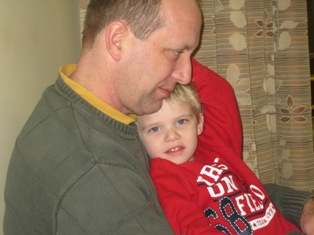 After talking to the doctor, the nurse and the anesthesiologist, they gave Josh some liquid sleep medication and this was taken as he started to get sleepy.  So we then put him in the crib where he just sat and stared at us, looking a little . .. well . .. stoned, for lack of a better word, and they wheeled him away.  He didn't cry, just looked at us like we were insane as we waved at him from across the room HA!

Darryl and I settled in to watch some TV and didn't even have time to find a channel before the doctor was back (actually 20 minutes) to tell us it all went well and he had put in three stitches under his tongue.  He warned us that most kids come out of the sleeping meds (everything was oral - no IV's) disoriented and will cry for 20 minutes to an hour.  We noticed other kids crying as they came out so we were ready.  We thought we would have about an hour wait but 10 minutes later, out came a nurse carrying Josh who was still very out of it (I thought it was neat that the nurses carry the kids out then roll the beds out a few minutes later). 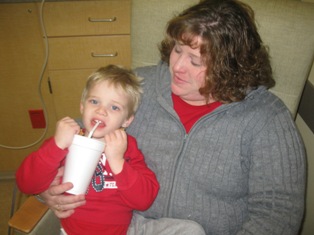 They got Josh a big cup of Apple Juice and some graham crackers right away.  There is actually a huge slushy machine so he could have had a slushy but he isn't a huge fan and really loves apple juice.  We found it funny that all of the instructions were soft foods only for the first 24 hours and yet they gave him graham crackers??? 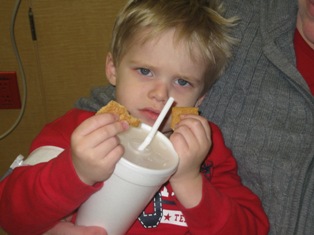 See that cute little face? He is still so out of it he has no idea what way is up!!!  About 20 minutes later we were wheeled out and on our way home.  Everyone raved about how great he was and that he didn't cry and all that stuff.  Well . . . apparently it takes him a lot longer to come out of the drugs then the normal 3 year old.  When we got home, he wanted to get out of the truck and walk himself but we did not realize that he was still 100% loopy.  He couldn't walk a straight line and kept falling in the snow and walking the wrong  direction.  Darryl finally just picked him up and the poor little guy went ballistic - screaming and crying.  Then when he got in he wanted to go downstairs (why? I don't know - my kids don't go downstairs unless they walk down with me to get laundry) so he got upset again.  It took him about an hour to come out of the anesthesia and get back to his normal self.  By early afternoon, he was playing on the floor and he ate a normal dinner.  On Thursday, other then saying once that his tongue hurt and once that he thought he had crackers stuck under his tongue (the stitches) he did fine.  We do notice changes already in his speech - but I have also noticed he hasn't figured out how to use his "new" tongue yet and some words that were clear aren't as clear now.  I'm thinking that as it heals, it will get better.

All in all, it was a good experience - and I am actually glad that he didn't break down until we got home and no one else had to listen to his screams except for Nana and Darryl and I.
Posted by Jackie Koll at 10:00 AM No comments: