This past Saturday we headed to Darryl's mom's house for the day to spend time with his Uncle and his wife as well as the rest of the family.  It dawned a beautiful day - Sunny and cool (my kind of weather!)  After getting the grocery shopping done and a salad made, we hit the road and headed to Grandma and Grandpa's house.  As we were driving down the road Nate pipes up and says, "Mom, lets sing the song I want to sing!" and he started to sing "Over the river and through the woods .  .. "  Of course, Darryl quickly made up new words like "Over the big road (the expressway) and down the road, to Barry County we go . ." hahaha  We sang it the whole way changing the words as we drove along.  On a side note, we tried a new thing for Nate's car sickness.  I picked up a bottle of some stuff you put behind his ears that is supposed to help - for the record, he did not get sick and he usually does so we'll keep using it and see if it works.  If not, we'll find something else just so he doesn't get sick!  We've also noticed that if he rides with his window open, he doesn't seem to get sick so yes, we let him put it down even driving down the expressway (yuck!)

Anyway, here's to our fun! This is the first time that we've been at my Mother-in-laws when we felt like we could just let the boys run.  I felt like I could just make sure I knew where they were but I didn't have to follow them around like puppies :-)  It wasn't long before they came back into the house and handed me their shirts - it was obviously time to go shirtless! 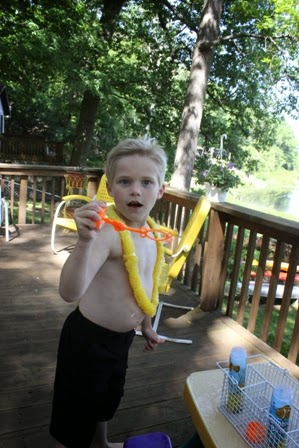 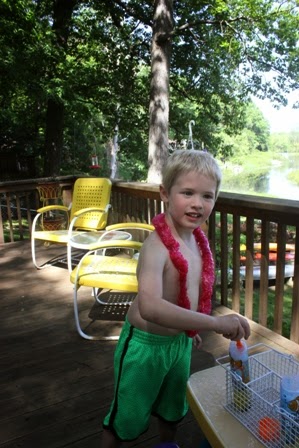 The theme of the party was "Hawaiian" but to the boys it meant "dance party" HA!  Nate kept asking when we were getting out the dance party stuff out.  Don't worry, eventually we did have a little dance fun on the lawn! 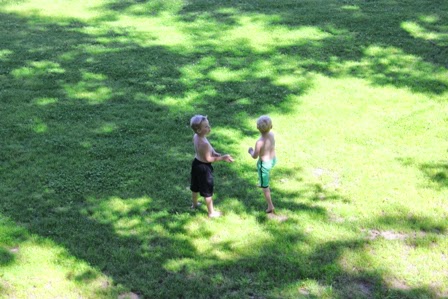 The boys had strict instructions that they couldn't go down by the lake without either me, Darryl or Grandma so they were beyond excited once we were all outside and they could run down on the grass below the deck. 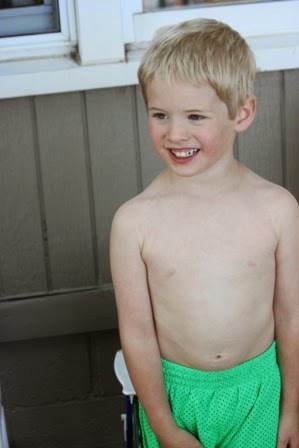 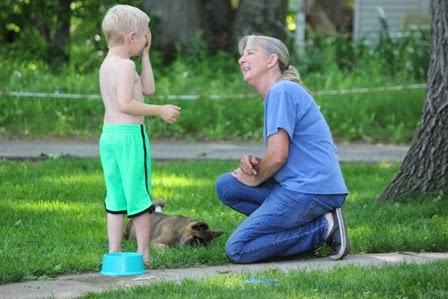 My sister-in-law brought her Akita puppy and Nate just adored the sweet thing.  She is a beautiful dog! 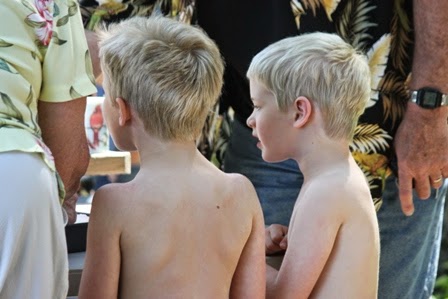 The other purpose of this party was a birthday party for Darryl's Uncle Jim's wife, Janet.  The boys love parties and were watching Grandma light the candles on the cake.  A funny story - Nate came inside and said something about "Daddy's mom and dad are outside."  We just figured he meant Darryl's mom and Charlie, her husband.  Later at dinner, though, Nate said, "Look, there's Grandma talking to daddy's Mom and Dad."  I had to not laugh out loud - he thought Darryl's Uncle and Janet were his mom and dad . .it made us all giggle a little :-) 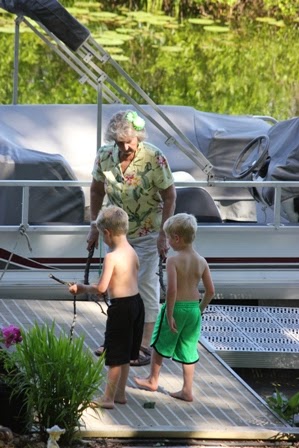 The boys love following Grandma around - I even heard the words, "I'm going to follow you everywhere, grandma" said by one of the boys. 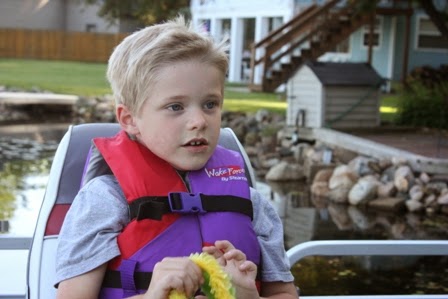 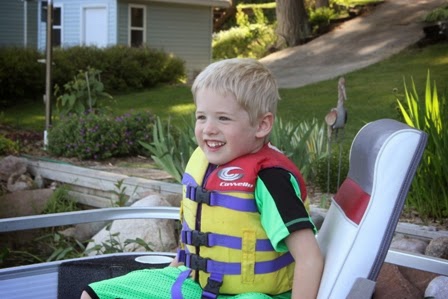 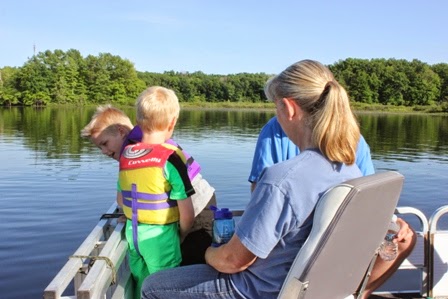 They had so much fun walking from one end of the boat to the other, looking over the side. 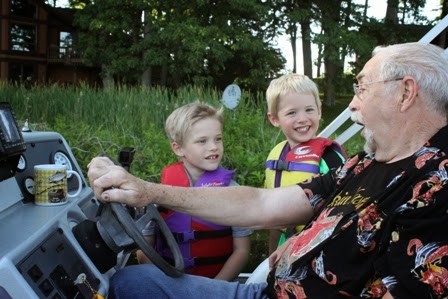 They finally settled in by Grandpa and he let them honk the horn as much as they wanted . . .. 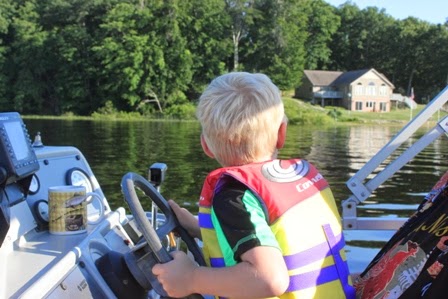 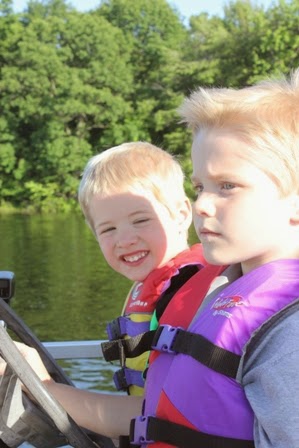 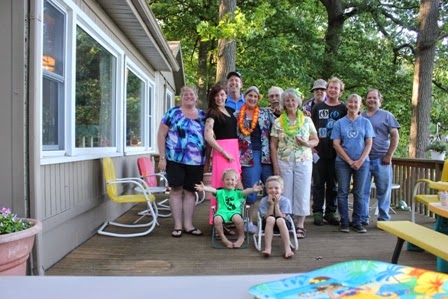 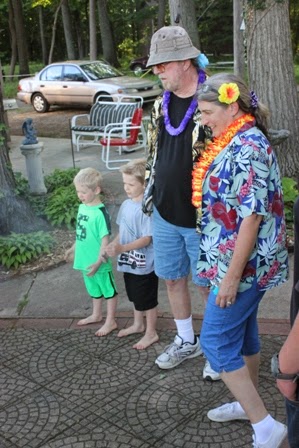 This is Darryl's Uncle Jim and his wife Janet.  I love this photo with the boys standing right by them. 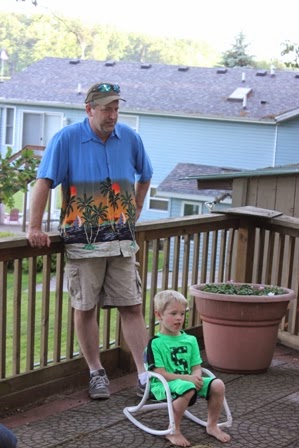 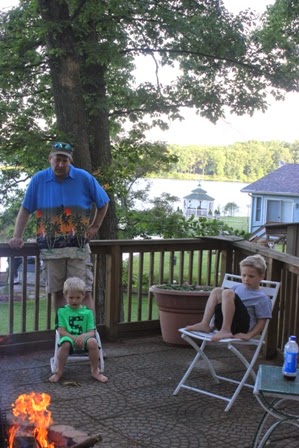 The night ended with a great bonfire and smores.  Josh worked very hard at roasting his own marshmallows and I'm not quite sure how no one ended up with a burning marshmallow in their face but all in all, he did ok :-)