Remember when you were a kid and you thought your parents were SOOOO old . . .and they were barely 40?  Now, YOU are that age and they are turning . . 70!  It kinda blows my mind that my dad is 70, really, I always thought that at 70 people were stuck in chairs with canes but that is not that case at all!

Per my dad's request, we did not throw him a big party (party pooper HA) but we did celebrate as family on Saturday the 13th.  Remember this POST about my brother and his family coming home - that was the BIG surprise for his birthday.

We all gathered at my brother's house and the boys quickly discovered my niece's American Girl house and had a blast. 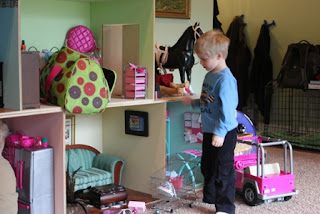 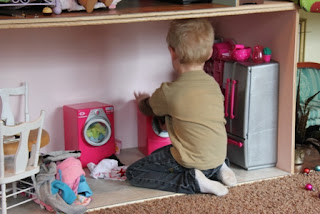 Funny story, one of the rooms is a "Hair Dresser".  We were all sitting in the dining room while the boys played.  What we didn't know is that there were scissors in that "room" and Josh . . .well, he likes to play Barber with his tools at home . . .so he cut the hair on one of the American Girl Dolls.  Seriously.  Thankfully my niece was a sweetheart about it but I still feel a little bad. 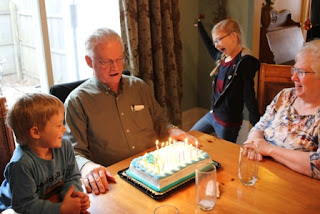 After a fabulous Steak dinner we had cake.  Now, we "roped" my brother Ken into grilling steaks (in the snow HA).  We felt it was penance for all of the lying he did previously hehehehe 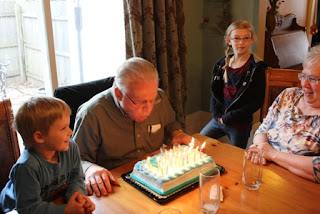 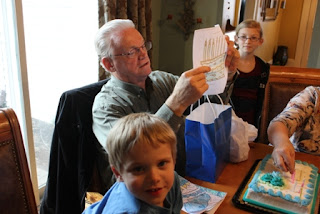 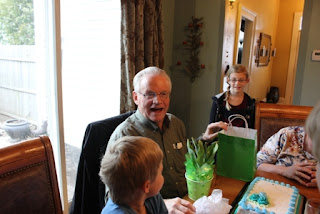 Now, I did not take a ton of photos and I'm not sure why.  I guess we were all wondering from room to room having conversations and I never took photos.  We did have fun though and even played cards (Up and Down the River) until 10:30.

Sunday, we all went to church and there was a little surprise planned for my dad there as well. 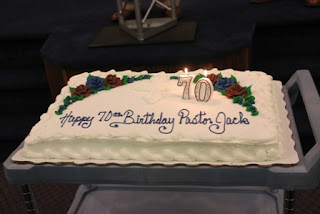 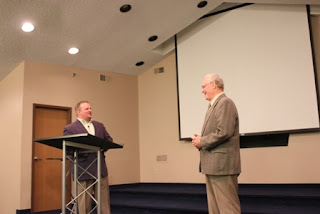 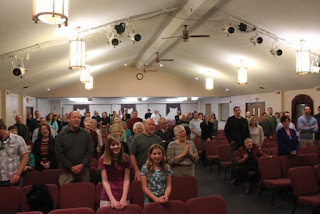 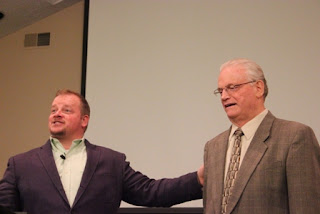 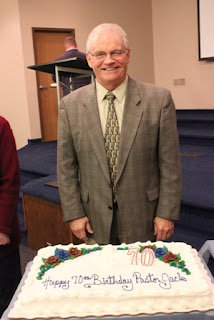 After the service, my dad was brought in (he teaches a class during the second service) - we sang to him and there was this awesome cake.  He had no idea (and neither did my mom).  It was so much fun!

The family then gathered at my parents for the afternoon.  My mom made a great dinner and we hung out.  We took Josh, Nate and Kate out to the "Ice Cream Store" for Ice Cream Cones per Josh's request (Should I mention that Kate is Josh and Nate's favorite person in the whole world???)  Then my wonderful husband played with the boys outside with their Big Wheels and took them for a walk.  Some how he always gets that job :-)