Our first full day of vacation dawned a beautiful day.  When planning this vacation, I planned out activities to do but we decided we would look at the weather each day and decide what "fit" best.  With that in mind, we decided that Monday was the best day to head to the island.  In retrospect, besides the weather, it was also the best day because it was the only day the boys woke up at 7:00 AND we were dressed for the day and had eaten breakfast by 9:00 HA. 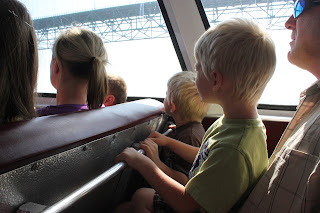 We headed to the ship dock to catch the 10:00 Ferry to the Island but we ended up getting on an "unscheduled" 9:50 sailing.  The captain then took us under the Mackinaw Bridge as a bonus - it was really cool!  We would have loved to have been sitting on top of the Ferry for this ride but the boys really wanted to ride inside.  It was still awesome to see the Bridge from that view though :-) 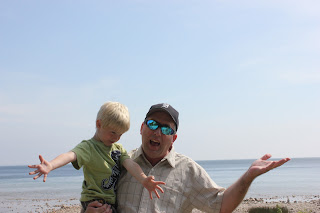 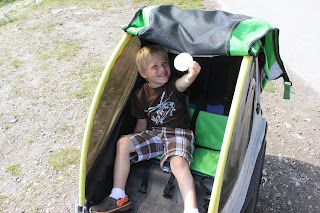 Once we got on the Island we decided to rent some bikes and pull the boys in a buggy behind Darryl's bike.  Best decision ever :-)  The boys loved the bikes and were always yelling for Darryl to go faster HA.  Now, you know how they say "it's just like riding a bike - you  never forget".  Boy are they wrong!  It always takes me a good 30 minutes to be able to ride that bike and not run into anything :-/  Even then, if I remove my hands from the handle bars or LOOK anywhere other then straight ahead, I get all wobbly on that bike!  It was still tons of fun though.  We did not ride all the way around the island (it is like 8 miles) but just kept the bikes for about 90 minutes. 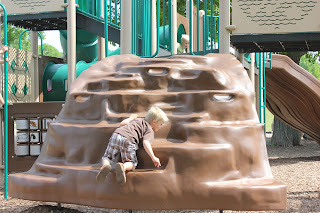 Before we left on vacation, I had asked Josh what he wanted to do while we were gone.  He listed two things: 1) Play on the Beach and 2) Play on a playground.  As luck would have it, there was a big playscape on the island so he got to play! 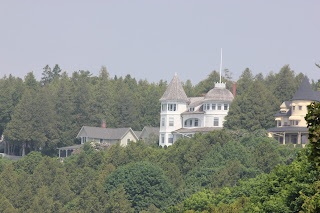 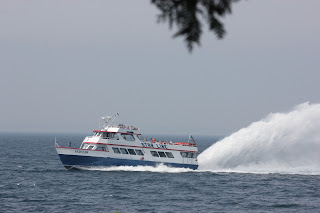 I enjoyed using my camera and taking some shots of things around the Island. 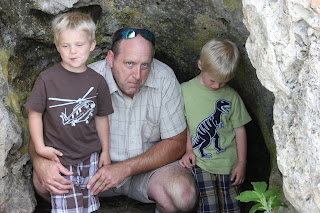 Josh wanted to pose this photo so he told each person what to look like.  (Nate is not really sad - he was just supposed to look sad HA) 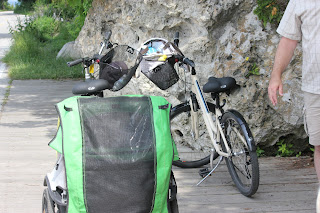 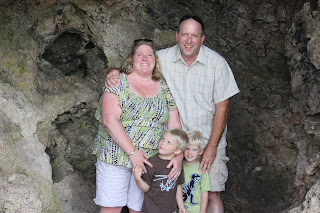 Someone kindly offered to take our photo :-) 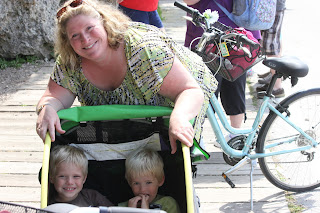 Me and my boys.  (By the way, I was supposed to be making a funny face but when Josh wasn't looking, I smiled hehehe) 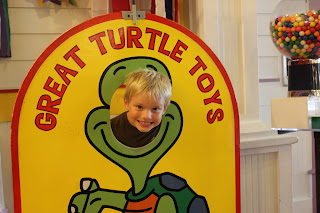 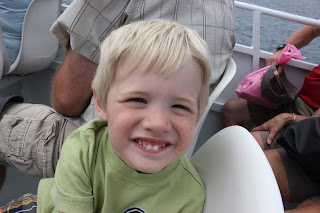 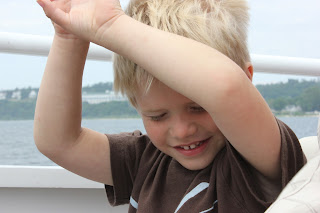 We ate a fantastic lunch on the island and then did a little shopping where the boys enjoyed being able to pick out some fun souvenirs to play with later.  It didn't take long for them to start asking to go back to the hotel.  We had done a lot of walking at that point and they were tired.  We grabbed our end of the "day" treat (some ice cream and chocolate's) before heading to the dock.  This time the boys wanted to ride on the top and we enjoyed a very cool, windy ride - it was awesome!

Once back in Mackinaw City, we went back to our hotel for a bit before heading to a well-reviewed Pizza place for dinner.  Then, as promised to the boys, we headed to the pool where we swam for well over an hour before heading back to the room.  The boys were free to play for quite awhile that  evening before heading to bed (late).  Another perfect day of vacation!
Posted by Jackie Koll at 7:00 AM

Email ThisBlogThis!Share to TwitterShare to FacebookShare to Pinterest
Labels: Vacation