I made a comment on Facebook yesterday that I was making Stuffed Green Peppers for dinner and had many people ask for the recipe.  Since it seemed like a popular recipe, I thought I would share it this week even though I have quite a few older recipes to share too!

We really like Stuffed Peppers but I have never found a recipe that either works or tastes good.  I had actually totally given up on ever making them.  I know, it sounds silly, but I've had recipes where I cook the meal for an extra 30-45 minutes and the meat is still not cooked or the rice is crunchy or . . you get the idea.  My cousin told me about this recipe and swore it turned it out every time AND would taste good.  Guess what? She was right.  The peppers were soft, the meat was cooked, the rice was perfect.  When I made it I thought, "Well, you couldn't make this for a crowd since it only uses 4 peppers" . .. well, that 4 peppers would feed 8.  Seriously.  After I took them out of the crock-pot, I sliced them in half - there was a lot of meat stuffed in that pepper!  I served them with some rice and biscuits but next time I will actually serve a side of spaghetti (since I serve extra sauce to go with the peppers anyway), green beans, and corn bread (ummm I planned corn bread for this meal but when I opened up the corn meal it had black dots in it and that just grosses me out!) If serving this for company, I would probably also add  a big salad :-)

On another note, as much as I love using a crock pot, I find that a lot of recipes take a lot of work and, at least to me, the point of a crock pot is to make cooking dinner easy.  This recipe is PERFECT.  There is no pre-cooking - just mix it and put it in the pot! 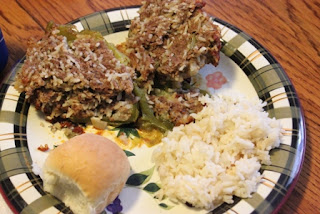 Chop up the onion into small pieces

Slice the tops of the green peppers and clean the insides.  Chop the tops up (minus the stems) to add to the filling.

In a large mixing bowl, add the beef and all other ingredients except the spaghetti sauce.

Mix with your hands and then lay it out on a cutting board - forming a circle.  Cut the circle into fourths and fill each pepper with 1/4th of the mix.  Place the peppers in the crockpot and cover with the sauce.  Season to taste.

Cover, turn on low and cook for about 8 hours.